Bassam Tibi is a Muslim who advocates for secular democracy. And he is an immigrant who advocates for integration of fellow Muslims in Western society. But today, Tibi says, critics of Islam are being silenced all across Europe. 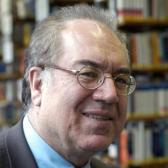 Bassam Tibi is a Muslim who advocates for secular democracy. And he is an immigrant who advocates for integration of fellow Muslims in Western society. But today, Tibi says, critics of Islam are being silenced all across Europe.

DANIEL GREENE:
Bassam Tibi, a descendent of Syrian nobility, left his homeland as a young man to study in Germany. Tibi is a Muslim who advocates for secular democracy. And he is an immigrant who calls for acceptance and integration of fellow Muslims in Western society. But today, Tibi says, critics of Islam are being silenced all across Europe. And after 44 years living in Germany, Tibi has decided to leave for the United States.

Welcome to Voices on Antisemitism a free podcast series of the United States Holocaust Memorial Museum. I'm Daniel Greene. Every other week, we invite a guest to reflect about the many ways that antisemitism and hatred influence our world today. Here's political scientist Bassam Tibi.

BASSAM TIBI:
I am a Muslim. I believe in Islam. It’s part of my life, my blood, if you want, yeah. But Islamism is a totalitarianism. And we have to teach people that Islamism has to be distinguished from Islam.

I have an Islamic education in Damascus. I learned the Koran by heart. And later on I discovered Islamic rationalism. And it is very important to, I mean, to combine the tradition of enlightenment in Europe—there’s an enlightenment tradition in Islam—and to combat totalitarianism.

And, I believe it is possible to reconcile Islam with modernity and democracy. However, on the grounds that Muslims do the job, and that they are willing to do the job.

Antisemitism was introduced to the Middle East coming from Europe, import from Europe, beginning with the 30s of last century. And the early wave of antisemitism in the Middle East was Arab nationalist; the later one Islamists. And, Arab nationalism is gone. It’s history. It’s now Islamism is there, and antisemitism is thriving. It’s becoming part of the political ideology. And with the Islamic migration to Europe, this ideology is coming back to Europe, and it exists in the Islam Diaspora within Islamist networks. And Islamist networks are based on a minority within a minority, yeah, but the minority is powerful.

You know when an ideology is being transmitted into a different culture, it changes—the kinds of mutation, yeah. So, the antisemite mindset of the Islamists is not the same as the Nazis, yeah. But the attitude is the same. So, if you dehumanize a group of people—and the Islamists dehumanize the Jews—even if they don’t say they want to kill them, the dehumanization is, in itself, it’s a crime, yeah.

There is an Islamophobia in Europe, in particular after 9-11, and people who are not educated, they do not distinguish, and they equate Muslims with Jihadists with Islamists. And we need here some education. So in the Diaspora you have a fight between Islamists—they have resources, they are powerful—and the Islamic reformers, who are few. They are intellectually strong, but in terms of infrastructure resources, we are very poor.

So, Islamic reform could be a bridge between Islam and European democracies. If this project fails, this bridge will be, would be broken, and the future of Europe will not be promising.