Aomar Boum returned to his native Morocco to study the trend of rising antisemitism there. He conducted interviews with four generations of Muslim Moroccans about their feelings toward Jews. What he found is a noticeable shift toward less interaction and greater hostility. 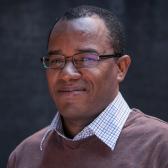 Aomar Boum returned to his native Morocco to study the trend of rising antisemitism there. He conducted interviews with four generations of Muslim Moroccans about their feelings toward Jews. What he found is a noticeable shift toward less interaction and greater hostility.

ALEISA FISHMAN:
Professor Aomar Boum returned to his native Morocco to study the trend of rising antisemitism there. He conducted interviews with four generations of Muslim Moroccans about their feelings toward Jews. What he found is a noticeable shift toward less interaction and greater hostility. With only a tiny Jewish population left, and limited education about Jewish history or culture in school, many young people form their impressions from Mein Kampf and the antisemitic, widely-circulated Protocols of the Elders of Zion.

Welcome to Voices on Antisemitism, a podcast series from the United States Holocaust Memorial Museum made possible by generous support from the Elizabeth and Oliver Stanton Foundation. I'm Aleisa Fishman. Every month, we invite a guest to reflect about the many ways that antisemitism and hatred influence our world today. Here's anthropology professor Aomar Boum.

AOMAR BOUM:
I did my study in the south. These are rural areas that used to have between 10,000 to 20,000 Jews, and now there are no Jews there. There are reminders there that Jews lived in those areas. You have Jewish neighborhoods; you have Jewish synagogues; you have Jewish cemeteries. You've got all these reminders that once upon a time there was a Jewish community there, but Jews are not there. So how do Muslims react to that absence? So it's Muslims' memories of Jewish absence. And the memory of the absence is shifting from an informed memory, to stereotypes and to anti-Jewish, racist discourse.

So here you have one of the oldest Jewish communities in the Arab world. You have one of the richest cultures in terms of symbiosis or historical coexistence between Jews and Moroccans. They influenced each other. They speak the same language. They eat the same food. They have the same dances. And that's what I hear, from all these older generations. They said: "We had to coexist because there are shortages of everything. We have to share water. Both groups are in the same boat." So you get a lot of examples from the older generation about Jewish peddlers or Jewish families helping Muslims in times of drought. So a lot of people from the oldest generation talk about this notion of "the Jews are helpful." Among the youngest generation, that doesn't exist at all. The word "helpful" among youngest generation is very, very small and narrow. The youngest generation sees it completely different: the Jew is powerful. And that is really influenced by The Protocols, to a large extent. And it's framed through the Arab-Israeli conflict.

When I grew up, the only context where I met Jews was in Marrakesh in 1981, where you'd leave school, and the first thing we do, we go and look for Jews who were leaving the Alliance—they had their own school at the time—and beat them up. I'm not proud of it but I'm not also shy to say what happened, because you get socialized to do certain things as a child. And it's a question of education. It's a question of exposure. But there is little space in Moroccan schools for Jewish culture, Jewish history. There is little of that. And of course when you see that younger generations are not exposed to Jewish and Muslim relations, and they're exposed more to stuff they're getting on the Internet. I guarantee you that all of the twenty respondents from the younger generation that I talked to, have never met a Jew.

My father mostly was a laborer. He didn't have land, he didn't have property. Both of my parents were illiterate; they never went to school. I don't think they understand the theoretical part of what I do, but they understand that I work on Jews and they don't have any problem with it. They are very proud of me as somebody who came from a very remote area in Morocco and as somebody where people with PhDs in my whole province probably you would count them on one hand probably. The good thing about what's going on in Morocco is that I'm not the only one who is doing this. A lot of Moroccans are actually engaging with these questions. Of course the big elephant in the room is always the Arab-Israeli conflict. But I've never felt threatened and if you decide to be an intellectual, you have to sincerely engage the questions that are problematic about your social milieu and your society; and that's what I feel my job is.

You can take this study that I did and apply it to any group. You can apply it to how African Americans think about white Americans. You can reverse it and see how white Americans think about African Americans, generation wise. And you could learn a lot from it by seeing these shifts, because these shifts would really inform us about what we as a society should do to make sure that our kids and future generations are aware of respecting other people. As a society, we have to figure out why things change the way they change and you have to correct it. Because you judge societies by how they respect difference, and you judge societies by how they respect the small numbers.