Antony Polonsky has learned that there are no simple answers to the large questions of history, no single view of the past. Any view of history must incorporate many truths, including some that may be difficult to accept. 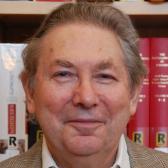 Antony Polonsky has learned that there are no simple answers to the large questions of history, no single view of the past. Any view of history must incorporate many truths, including some that may be difficult to accept.

ANTONY POLONSKY:
The most important thing about the past is that you can’t change it. We have to accept it. And the goal is really to understand the dilemmas that people faced.

ALEISA FISHMAN:
A professor at Brandeis University, Antony Polonsky has taught history for 40 years. In that time, he has learned that there are no simple answers to the large questions of history, no single view of the past. Any view of history must incorporate many truths, Polonsky says, including some that may be difficult to accept.

Welcome to Voices on Antisemitism, a free podcast series from the United States Holocaust Memorial Museum made possible by generous support from the Oliver and Elizabeth Stanton Foundation. I’m your new host, Aleisa Fishman. Every other week, we invite a guest to reflect about the many ways that antisemitism and hatred influence our world today. Here’s professor of Holocaust studies Antony Polonsky.

ANTONY POLONSKY:
Throughout northeastern Europe in the Second World War, there was conflict between the different elements in the resistance movement. Resistance was not only an attempt to fight the Germans, but was also a struggle for control of the postwar society. So there was a conflict between the Communist partisans and the Nationalist partisans. The only way the Jews could save their lives was by being in these partisan formations. And generally speaking, neither the Polish nor the Lithuanian partisan movements admitted Jews in significant numbers, so that the Jews could only be a part of the Soviet partisan movement, which meant that they were often used in operations in which goods were requisitioned from villagers—often by force—or reprisal actions were taken against villagers who had in some way assisted the Germans.

I think it’s also the case that in these civil war situations, partisans often took actions which were quite brutal, and this applies also to Jewish partisans. One of the issues that we have to understand is that all of the countries of Eastern Europe were subjected to two occupations—a Nazi and a Soviet occupation. For the Poles, the Lithuanians, Latvians, the Ukrainians, they were faced with two enemies, or faced with how to choose between them. The Jews were in a different position. For the Jews, the Nazis were unequivocally enemies, whose goal was to destroy physically Jews in Eastern Europe. Soviets were potential allies. So we’re talking about a very complicated situation in which two totalitarian systems are in conflict, and in which a lot of innocent people on all sides are suffering. And what we need to do is to understand the complexity of these events and show some empathy for all those people—including Jews—caught up in this tragic conflict.

It seems to me that antisemitism is one of those ideologies or attitudes which doesn’t often exist on its own, it has to be combined with something else. And here the desire to blame Communism on Jews is a way of saying we were not responsible for this. And we are all innocent of what happened. It’s much easier to come to terms with the Nazi occupation—particularly in Poland. Because in the case of the Nazi occupation, the Poles were against the Nazi occupation, they mostly resisted the Nazi occupation. There was not much collaboration, there was some, but not significant. It’s easy to deal with. In the case of the Communists, it’s much more difficult. But yes, I think coming to terms with the past does mean understanding the context in which all this took place.

What I try and do—it’s to submerge oneself in this material so that you understand how people react. It’s like, you pour a lot of water on a piece of ground so that when you pour more, it moves in a different way. So you understand how it moves. This was a very tragic period. There is no redeeming aspect to a lot of this. It’s a tragedy.

So it’s just an attempt to try and understand it. And do we learn lessons from it? Well the trouble with history is that we learn from the mistakes of the past to make different mistakes. Maybe one can become wiser from this. But I think that what one is struck with above all is human resilience, how people didn’t give in. And that’s what one tries to preserve.

ALEISA FISHMAN:
Voices on Antisemitism is a free podcast series of the United States Holocaust Memorial Museum. Join us every other week to hear a new perspective on the continuing threat of antisemitism in our world today. We would appreciate your feedback on this series. Please visit our website, www.ushmm.org.