Concerned about a rise in racism and violence, Alexander Verkhovsky examines how interethnic conflict is fostered and spread throughout his native Russia. 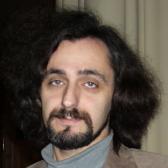 Concerned about a rise in racism and violence, Alexander Verkhovsky examines how interethnic conflict is fostered and spread throughout his native Russia.

ALEXANDER VERKHOVSKY:
Most young Nazi skinheads, like 14 years old or 15 years old, they do not think in complicated ideological constructions. They call themselves "Nazi" because it is tough. And at the same time, they are just street hooligans who like to beat somebody.

ALEISA FISHMAN:
Concerned about a rise in racism and violence, Alexander Verkhovsky looks at how interethnic conflict is fostered and spread throughout his native Russia. As director of the Moscow-based SOVA Center for Information and Analysis, Verkhovsky researches and reports on nationalism, xenophobia, and human rights violations.

Welcome to Voices on Antisemitism, a podcast series from the United States Holocaust Memorial Museum made possible by generous support from the Oliver and Elizabeth Stanton Foundation. I'm your host, Aleisa Fishman. Every other week, we invite a guest to reflect about the many ways that antisemitism and hatred influence our world today. Recorded during his recent visit to Washington D.C., here's Alexander Verkhovsky.

ALEXANDER VERKHOVSKY:
Our society, in general—not teenagers, but the whole society—is very ethnocentric in perception of social problems. So if something is bad, it is because of some interethnic problem.

These young people, they see "occupation," how it is called. Our country is "occupied" by all these "aliens." They feel like heroes of underground. And they really are a threat—because they commit many violent attacks; they promote violence; they hold many Web sites, which are promoting hatred and discrimination and violence also. As the final purpose, of course, they dream to organize huge political movement, which would involve the majority of population. And they have some grounds for such a hope.

There are a lot of talk about these interethnic problems. Very many social problems are interpreted in ethnic language. And the society has to do something against that, and the government has to do something. But practically nothing is done, so things are going on as they are.