Since the Holocaust, social psychologists have asked: Why do people succumb to evil? Theories point to peer pressure and the power of conformity. But Alex Haslam and Steve Reicher reject the idea that people become automatons in a group. Their mock-prison study reveals something more complex about the ways individuals sign on to a brutal agenda. 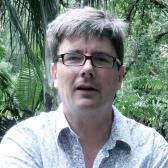 Since the Holocaust, social psychologists have asked: Why do people succumb to evil? Theories point to peer pressure and the power of conformity. But Alex Haslam and Steve Reicher reject the idea that people become automatons in a group. Their mock-prison study reveals something more complex about the ways individuals sign on to a brutal agenda.

ALEISA FISHMAN:
Since the Holocaust, social psychologists have dedicated a lot of time to the question: Why do people succumb to evil? Popular theories point to peer pressure and the power of conformity. But Alex Haslam and Steve Reicher reject the idea that people become automatons in a group. They designed a mock-prison study, in partnership with the BBC, which reveals something more complex about the ways in which individuals sign on to a brutal agenda.

Welcome to Voices on Antisemitism, a podcast series from the United States Holocaust Memorial Museum made possible by generous support from the Elizabeth and Oliver Stanton Foundation. I'm Aleisa Fishman. Every month, we invite a guest to reflect about the many ways that antisemitism and hatred influence our world today. From the University of Queensland in Brisbane, Australia, here's Alex Haslam.

ALEX HASLAM:
The BBC Prison Study (external link) was a study that I conducted with Professor Steve Reicher, at the University of St. Andrews, in 2002. And it was an attempt to revisit issues that had been raised by one of the most famous social psychology studies of all time, which is the Stanford prison study, which had been conducted in 1971 by Philip Zimbardo and his colleagues.

In that study, Zimbardo had put some college students in the basement of the psychology department at Stanford. He'd assigned them to roles as guards and prisoners. And what he observed over a period of just a few days: the guards became increasingly brutal, the prisoners became increasingly passive, and the study had to be drawn to a very premature end. Now, Zimbardo's argument was that that happened because people naturally conform to roles—blindly, carelessly, thoughtlessly. Well, actually everything that Steve and I had done suggested that there were some problems with that argument. So we just pure and simply wanted to conduct a study of our own to see if that was actually the case.

Our analysis of what had gone on in the Stanford study was that a lot of that was contingent upon the role that Zimbardo himself had played in that study. Zimbardo had had played the role of the prison superintendent. So, actually, we'd argue, the reason that his guards were brutal was because they believed in Zimbardo's leadership. They believed they're helping science.

So, one of the really critical differences in our study was that we were just observers; we didn't have any role within the prison. And the very kind of simple point to make is that the prison didn't just veer naturally towards some sort of brutal toxic regime. So, our argument is that rather than being some natural process of conformity, actually tyranny and brutality is a result of identification with the regime which one is pushing forward. And, of course, then abstracting to the world at large, our point is that Nazis did not behave the way they did because they were just going along with some script. The sad truth is they did it because they believed in what they were doing.

It wasn't the case that Hitler and the Nazi regime just stood up in front of Germans and said, "Let's go and do something evil." Actually my prediction would be that if they had done that, not many people would have gone along with them. What they had to do was create an identity and a vision of their group, which presented them as victims and presented them as needing to right some historical wrongs, and to then enjoin ordinary Germans to join in that project. Even if you're just doing Clean Up Australia Day or whatever it might be, you know, people have got to believe in Australia; they've got to believe it's a good idea.

For me, one of the problems with the Stanford Prison Experiment is it says there's a horrible inevitability to tyranny and oppression. If you just put people in groups and you give them power, they will naturally oppress other people. I think that's wrong, actually. I think it's dangerously wrong, because it leads us to imagine that we can't do anything about tyranny. And actually, if you run away from groups you're probably not going to get the means to take society forward, or indeed to engage in resistance.

I think also that means that when people do bad things you have to recognize that they can't just be left off the hook by saying, "Well, you know, that's just human nature. I wasn't really thinking," which is, again, what Eichmann and Nazi perpetrators typically said: "I was just obeying orders." Well, actually, people don't just obey orders is a pretty central message. And then I think, once we understand that this is about social identity, I think it behooves us to interrogate the content of the identities that we hold dear. You know, as a member of the scientific community, what am I prepared to do in the name of science? And possibly, the answer is more sometimes than I should. And similarly, I think, when we have other identities that we believe in, we might be willing to do things to other groups that actually, in the broader scheme of things, are wrong and will be seen to be wrong. Sometimes as psychologists we see our job is to kind of explain why the world is the way it is. But I think we also have to show not just why the world is the way it is, but also what we can do to change it. And I think the answer to that is plenty.