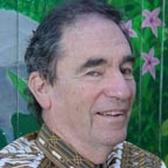 ALBIE SACHS:
For me, the anti-apartheid struggle was a form of combating racism, which had manifested itself in antisemitism, reaching ghastly proportions through the genocide. But it was all part and parcel of a similar form of inhumanity of human beings to other human beings.

DANIEL GREENE:
Albie Sachs has been instrumental to the struggle for human rights in South Africa. As a lawyer defending victims of the apartheid government, Sachs was harassed, jailed without trial and eventually driven into exile. In 1988, he survived a car bombing that robbed him of his arm and sight in one eye. After the fall of apartheid, President Nelson Mandela appointed Sachs to South Africa's Constitutional Court.

Welcome to Voices on Antisemitism, a free podcast series of the United States Holocaust Memorial Museum made possible by generous support from the Oliver and Elizabeth Stanton Foundation. I'm Daniel Greene. Every other week, we invite a guest to reflect about the many ways that antisemitism and hatred influence our world today. From Capetown, South Africa, here's Justice Albie Sachs.

ALBIE SACHS:
I was born into the struggle. I just didn't stand a chance.

My dad was often in the newspapers. Solly Sachs arrested. Solly Sachs tells the government something or another.

My mom worked for Moses Katani, who was then the general secretary of the Communist Party of South Africa and a very prominent member of the ANC, African National Congress. And I can still remember as a child my mom saying, "Tidy up, tidy up, Uncle Moses is coming."

And it meant the first contact that I had as a child with an African personality was not somebody coming as a servant, but, if you like, she was the servant, but in a very dignified and very affectionate way.

So that was the kind of world I grew up in.

And World War II just dominated everything. Stories of battles, and particularly as a young boy growing up, the idea of heroism, of courage, was overwhelming.

And then my parents both being very, very active in relation to, not that kind of physical combat and that kind of courage, but to idealism, transforming South Africa—rights for workers, for poor people, anti‑racism.

So the Jewish dimension was a very important part of the background, the context. It was why my parents had fled from Lithuania, but more than that, the ideals they carried with them, their responsiveness to the idea of a world based on justice, rights for everybody.

In my own case, most of the work I did was defending people charged under racist statutes. It was fulfilling work, but in many ways terrible work because the laws were totally unjust. Everything was weighted against people struggling for their rights.

Eventually, I couldn't leave the area of Capetown. I couldn't go into what were called "black areas." And finally I was detained under what was called "The 90‑day Law"—detention without trial. And then two years later, detained a second time.

Eventually in 1966, it was impossible for me to carry on practicing as a lawyer, and I decided I just couldn't function in South Africa anymore.

At the beginning of 1990, the ANC was unbanned. Nelson Mandela was released. Serious negotiations started. I could go back to South Africa.

And my major ambition then was to contribute towards a new constitution for South Africa. And we just worked around the clock on just getting it right. We had a new democratic parliament. The parliament chose Nelson Mandela as president, and I was one of the eleven judges put onto the Constitutional Court.

It's been quite wonderful work, defending the constitution that we all helped to write. And you don't submerge or lose your identity. You bring that into the new South Africa. So, I'm pretty optimistic. No guarantees in life or politics, but I'm pretty optimistic that we are on the right road.