< Holocaust Denial and Antisemitism in Iran 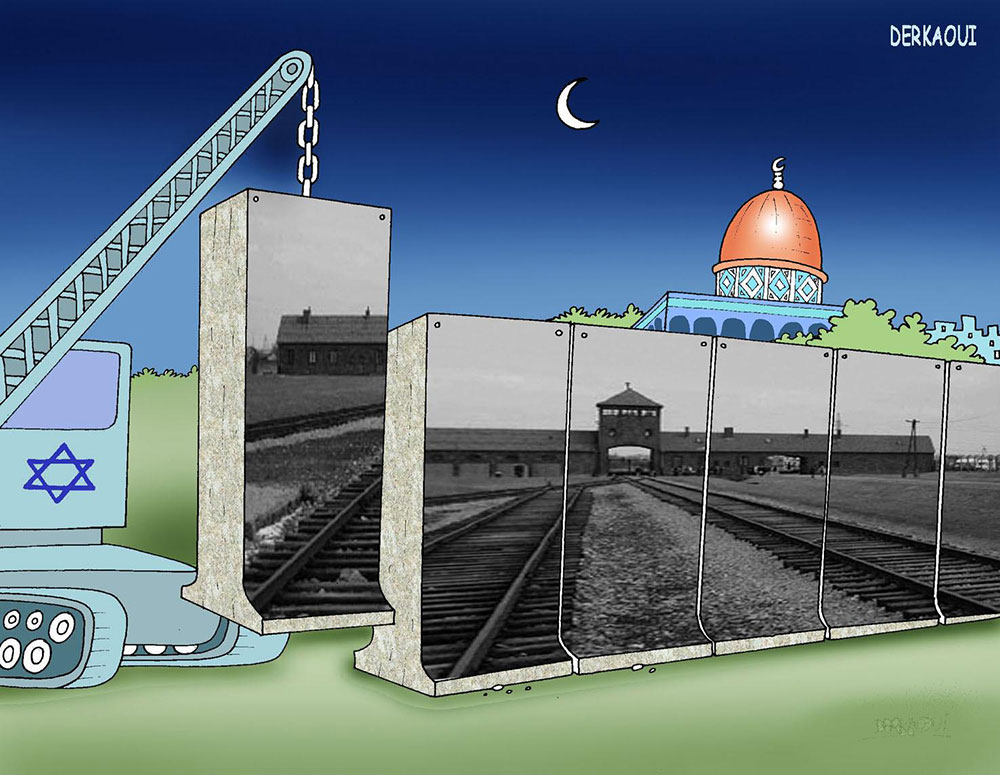 This cartoon by Derkaoui Abdellah won the 2006 Holocaust cartoon contest. It depicts an Israeli crane erecting a wall around Jerusalem. Partially hidden by the wall, which has the Auschwitz concentration camp painted on it, is the dome of the Al-Aqsa mosque. —Derkaoui Abdellah/Morocco

In December 2015, two state-sponsored Iranian cultural organizations, the Owj Media & Art Institute and the Sarcheshmeh Cultural Complex, announced a Holocaust cartoon contest, expecting to receive entries from cartoonists in dozens of countries. Over 150 cartoons from this contest made up a May 2016 exhibition at the Islamic Propaganda Organization in Tehran. After the closing of the Tehran exhibition on May 30, 2016, the Islamic Propaganda Organization sponsored exhibitions of selected cartoons in provincial capitals throughout the country.

An earlier contest was held in 2006 with 1,200 submission from over 60 countries. The Palestine Museum in Tehran later opened an exhibition of 200 cartoons from this contest sponsored by then-Iranian President Mahmoud Ahmadinejad. These contests occur in the context of official Iranian policy and practice of promoting Holocaust denial, as well as what the United States Holocaust Memorial Museum has called “genocidal language against Israel” from top Iranian leaders.

These contests are insulting to the victims and memory of the Holocaust.

The Iranian government has prevented Iranians from learning about the Holocaust. Iranian citizens should have access to accurate information about this history, including Iran’s unique connection to it. During World War II, Nazi Germany targeted Iran for its resources, and Allied forces invaded and occupied the country. Iran accepted some 116,000 Polish refugees and Anders Army personnel fleeing horrible conditions in labor camps in the Soviet Union. Among the civilians were 1,000 Jewish children, the majority of them orphans. Abdol Hossein Sardari, an Iranian diplomat, provided critical assistance to Iranian and other Central Asian Jews in occupied France. Nevertheless, some Iranian Jews were still deported to concentration camps.

Learn more about the Holocaust and Iran and the 2016 cartoon contest:

Resources are also available in Farsi.