A Persecuted Minority Next 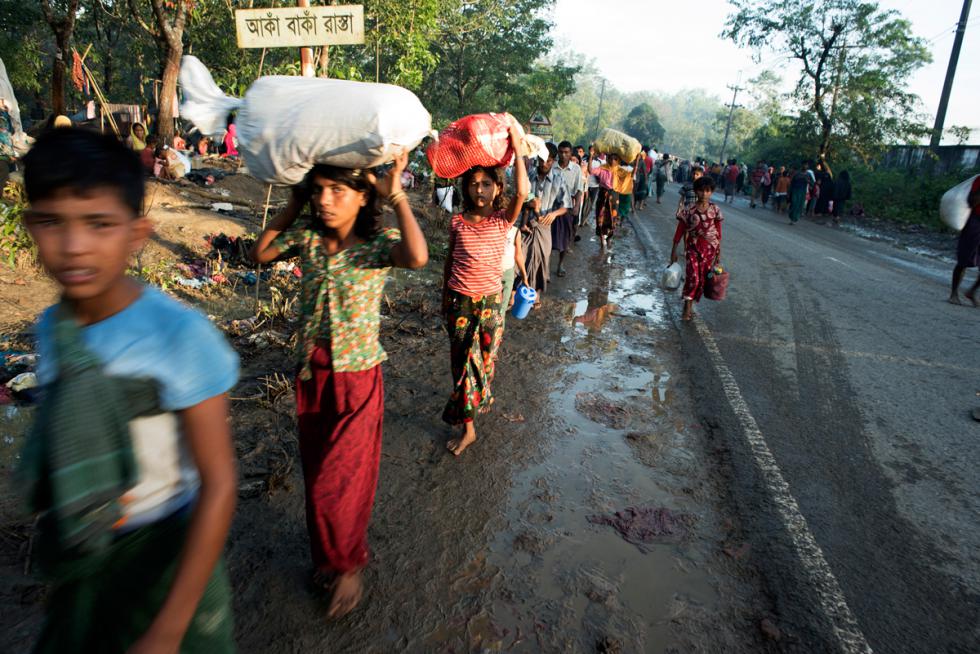 Hundreds of thousands of Rohingya have flooded into southern Bangladesh. The north-south highway between Cox's Bazar and Teknaf is a steady flow of Rohingya refugees, September 2017. —Greg Constantine, US Holocaust Memorial Museum

The Rohingya are a Muslim minority group in Burma. They have faced a long history of severe discrimination and persecution, violence, denial of citizenship, and numerous restrictions at the hands of Burmese authorities. The Museum has, since 2013, been sounding the alarm about the potential risk of genocide and other mass atrocities being perpetrated against the Rohingya. These warnings have gone largely unheeded, leading to indescribable human suffering.

The Rohingya population has suffered mass atrocities—including crimes against humanity and ethnic cleansing—and in December 2018 the Museum determined there was compelling evidence that genocide had been committed against the Rohingya.

Secretary of State Antony Blinken came to the Museum in March 2022 to announce the US government's determination that the Burmese military had committed genocide and crimes against humanity against the Rohingya.

Visit our online exhibition, "Burma’s Path to Genocide," to learn more about how the Rohingya went from citizens to outsiders—and became targets of a sustained campaign of genocide.

An estimated 700,000 Rohingya have fled from Burma to Bangladesh since August 2017, where they live in overcrowded camps. These latest episodes of violence are a sharp escalation of the long-running, state-led persecution and attacks by the Burmese military and other security forces on the Rohingya population.

A joint report by the Simon-Skjodt Center for the Prevention of Genocide and Fortify Rights documents the mass atrocities committed against Rohingya civilians by the Burmese military, and details the evidence of genocide against this group. The report stresses that supporting Burma’s democratic leadership while simultaneously condemning the Burmese military’s mass atrocities are not contradictory courses of action. They are two crucial elements of a strategy to promote civilian protection, accountability, and democracy.

Title: "They Tried to Kill Us All," Atrocity Crimes against Rohingya Muslims in Rakhine State, Myanmar

Authors: Simon-Skjodt Center for the Prevention of Genocide, Fortify Rights

Previous reports:
May 2015 report on the Plight of Rohingya in Burma (PDF)
September 2015 update (PDF)

Burma’s leaders have denied that mass atrocities have been committed against Rohingya victims, contradicting the statements of high-level United Nations officials, including a UN Fact-Finding Mission that concluded in August 2018 that senior Burmese military officials should be investigated and prosecuted for genocide and other crimes.

In September 2018, the United Nations Human Rights Council mandated the creation of an independent investigative mechanism to collect, preserve, and analyze evidence of atrocity crimes in Burma.

Burma has an obligation, as a party to the Genocide Convention and under customary international law, to prevent genocide. A case currently before the International Court of Justice (ICJ) will determine whether Burma violated this obligation. On January 23, 2020 the ICJ ordered Burma to take all measures to prevent the commission of genocide. To date, Burma has taken insufficient steps to mitigate the risk of genocide and advance effective justice measures.

The Simon-Skjodt Center remains concerned about the potential for future atrocities against those Rohingya remaining in Burma.

The Center is also concerned about the plight of those displaced. The majority of Rohingya now live as refugees outside Burma. Thus far, conditions in Rakhine State, Burma, are not secure enough to facilitate safe, voluntary returns of those who fled to Bangladesh. We believe they will again face the threat of genocide if they return to Burma. At the same time, the extended displacement of Rohingya in Bangladesh serves to solidify the Burmese military’s campaign of ethnic cleansing.

A Persecuted Minority Next