When Helen Jonas speaks of SS officer Amon Goeth, her voice still bears traces of the horrors she witnessed as his house servant at the Plaszow Concentration Camp. Sixty years later, Jonas met with Goeth's daughter Monika, a meeting recorded for the documentary film Inheritance. 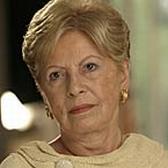 When Helen Jonas speaks of SS officer Amon Goeth, her voice still bears traces of the horrors she witnessed as his house servant at the Plaszow Concentration Camp. Sixty years later, Jonas met with Goeth's daughter Monika, a meeting recorded for the documentary film Inheritance.

HELEN JONAS:
As a survivor I can tell you that we are all traumatized people. Never would I, never, believe that any human being would be capable of such horror, of such atrocities. When we saw him from a distance, everybody was hiding, in latrines, wherever they could hide. I can't tell you how people feared him.

ALEISA FISHMAN:
When Helen Jonas speaks of SS officer Amon Goeth, her voice still bears traces of the horrors she witnessed as his house servant at the concentration camp in Plaszow, Poland. Goeth was commandant of the camp, which was portrayed in the movie Schindler's List. And it was Oskar Schindler himself who eventually saved Jonas from Plaszow. After the war, Goeth was hanged by Polish authorities. Sixty years later, Jonas met with Goeth's daughter Monika, a meeting recorded for the documentary film Inheritance.

Welcome to Voices on Antisemitism, a podcast series from the United States Holocaust Memorial Museum made possible by generous support from the Oliver and Elizabeth Stanton Foundation. I'm your host, Aleisa Fishman. Every other week, we invite a guest to reflect about the many ways that antisemitism and hatred influence our world today. Here's Holocaust survivor Helen Jonas.

HELEN JONAS:
When I arrived in Camp Plaszow, I was assigned to clean barracks. At the third day, a tall SS walked in the room, and he was Amon Goeth. At the time, I didn't know who he was. But he looked around and he said to the woman that was in charge of us to send me to his house. And I really didn't know what a brutal man he is, but he was a madman. He was a madman. He always, from the balcony he watched the camp, and he's standing with the little machine gun through the window. He said, "You see those dumb heads? They're standing, doing nothing." He says, "I'm going to shoot." And you could hear shooting like hell. And I could hear him whistling a happy tune, like he did so well. And this face…with such satisfaction! I can't forget that. The dreams after so many years…he's chasing me, I'm hiding. Because I lived in constant fear, constant fear, just looking at him. He was barbaric.

Monika was the daughter of Amon Goeth, and I received a letter from her. And it was a very sensitive letter. She explained that she was a little girl when they hung him and she wants to meet with me. She would appreciate. And at the very end, she said, "Helen, I know it's very hard for you, but it's also hard for me, but we have to do it for the murdered people." And that touched me. And at the same time, I feared, you know, walking the walk of my past and remembering and relating to those brutalities and atrocities. But I felt that otherwise, it's going to be forgotten.

Monika, she accepted the fact that her father was a killer, but she still wanted to defend him. She said to me that, "They all were doing it." I said, "But he was the one that gave all the orders." So, it's just like she still protected…"They all were doing it." It just, like, annoyed me, you know? It's hard for me to be with her because she reminds me a lot of, you know…she's tall, she has certain features. And I hated him so. But she is a victim. And I think it's important because she is willing to tell the story in Germany. She told me people don't want to know, they want to go on with their lives. And I think it's very important because there's a lot of children of perpetrators, and I think she's a brave person to go on talking about it, because it's difficult.

And I feel for Monika. I am a mother, I have children. And she is affected by the fact that her father was a perpetrator. But my children are also affected by it. And that's why we both came here. The world has to know, to prevent something like to happen again.