Preparing Military Leaders to Be Agents of Change 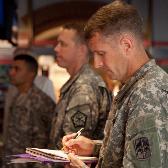 In 2011, the Museum forged a new partnership with the US Army Command and General Staff College to design a Holocaust and genocide prevention elective for officers. Held at the Museum, the four-session course makes use of Museum exhibitions, resources, and expert panels to educate officers about various interagency tools available to the US government to prevent genocide and mass atrocities. In 2013, the course began its seventh run.

Participants examine the Holocaust and the early-warning indicators that were evident in 1930s Germany, exploring how genocide requires the complicity and collaboration of many and analyzing examples of both response and nonresponse by the world community—including by the United States. Museum educators also invite members of the interagency community to discuss their approaches to preventing and responding to genocide today.

“[This course] is a powerful forum for future military planners and commanders,” explains one officer who participated. “[We] must understand the interagency and international support available, while maintaining a healthy realism that the US government might stand alone.”

The final session culminates with a presentation by a Holocaust survivor whose personal experiences punctuate the range of people involved in perpetrating or allowing genocide and the consequences of failing to respond until it’s too late.

Innovative in subject matter and approach, the course supports recent genocide-prevention efforts undertaken by the US government like the creation of the Atrocities Prevention Board. In launching that initiative, President Obama declared that genocide prevention is in the national security interest of the United States and one of our country’s core moral responsibilities.

“I have deployed to Iraq twice,” explains an officer who completed the fall 2012 course. “I have seen firsthand that war is a destructive force, but this course has challenged me in new ways…I believe officers have a great responsibility to look for warning signs of genocide.”