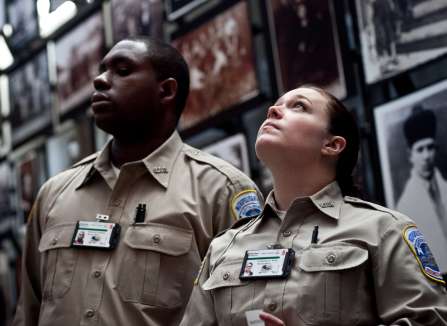 Established in 1999 and presented in partnership with the Anti-Defamation League, the program is suitable for recruit, in-service, and command professionals in law enforcement at the federal, state, and local levels. Each five-hour training session includes:

To date, this innovative program has reached more than 80,000 officers from the US and 80 countries worldwide. Learn more and meet the staff.

During the Holocaust, the police were central figures not just in maintaining public order but also in combating so-called racial enemies of the Nazi state. They also played a key role in the concentration, deportation, and murder of Jews in Nazi-controlled Europe. Explore this history through the links below.

German Police in the Nazi State
SS and Police
German Police: From Weimar Republic to Nazi Dictatorship
Case Study: The Sass Brothers "Have Some Fun"[PDF]