Syria Previous The Failure of International Policies Next

In 2011 in the midst of the Arab Spring, and calls for democracy across the Middle East, a group of teenagers wrote the words “Your Turn, Doctor” on the wall of a school in the city of Daraa. These words were a reference to President Bashar al-Assad, a trained opthamologist, and a call for democratic reforms in Syria. The teenagers were detained and tortured. In response to this incident, Syrians staged mass demonstrations demanding these reforms and respect for their human rights. The regime reacted with mass arrests and lethal violence, which provoked an armed response. By mid-2012, the country was in the midst of a full-scale civil war.

At the beginning, the uprising was non-sectarian. It sought to highlight the religious and ethnic diversity of the demonstrations. This mass movement was calling for reforms of Syria’s democratic process that would protect the rights of all Syrians. In the intervening years, the conflict has since taken on sectarian overtones. President Assad has repeatedly fueled this dangerous narrative, playing on the religious minorities’ fear of persecution should Syria’s Sunni majority take power. 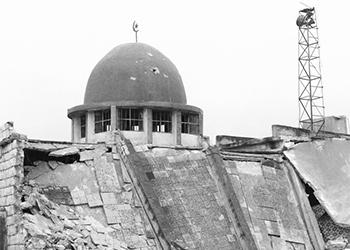 A Syrian government warplane bombed the central mosque in Ma'arat Hirmah, in northern Syria, on October 16, 2013. —Andree Kaiser for the US Holocaust Memorial Museum 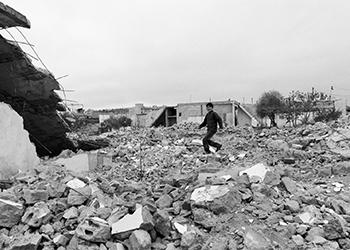 Townspeople said the bombing was apparently intended to avenge protest marches against the Assad regime. —Andree Kaiser for the US Holocaust Memorial Museum

President Assad claimed those who opposed the regime were Islamist terrorists. He deployed security forces, assisted by militia largely drawn from his base of support in Syria’s Alawite community, to rain terror on neighborhoods and civilians. These forces committed mass atrocities against civilians, including kidnapping, torture, sexual violence, and massacres. These crimes increased hostility toward the Alawites and other religious minorities, whose failure to side with anti-Government forces was viewed as support for the regime.

The conflict also attracted thousands of foreign jihadi fighters. While some joined armed groups seeking to overthrow the Assad regime, tens of thousands came to join the self-proclaimed Islamic State (IS), which used the chaos of the Syrian conflict to pursue its own goals. IS sought to establish of an area of autonomous control, and in the spring of 2013, seized control of territory in northern Syria from anti-Government armed groups. IS proceeded to embark on a campaign of persecution and horrific brutality against communities and individuals who did not ascribe to its brand of Islamist extremism. Since its collapse in March 2019, elements of IS continue to launch small-scale attacks on civilian targets in Syria.

Syria Previous The Failure of International Policies Next