Massacre of the Tutsi Minority Next 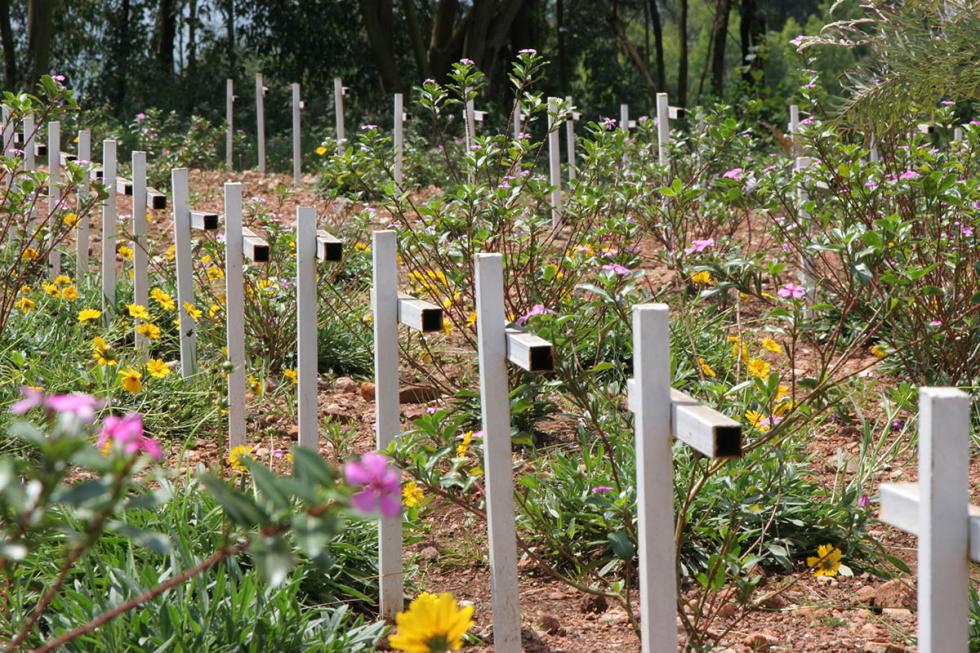 A cemetery in Rwanda where victims of the genocide are buried. —US Holocaust Memorial Museum

In 1994, Rwanda’s population of 7 million was composed of three ethnic groups: Hutu (approximately 85 percent), Tutsi (14 percent) and Twa (1 percent). From April–July 1994, between 500,000 and one million Tutsi and moderate Hutus were slaughtered when a Hutu extremist-led government launched a plan to murder the country’s entire Tutsi minority and any others who opposed the government's policies.

There is a longstanding history of tension between the Tutsi and Hutu ethnic groups in Rwanda, even though they speak the same language, follow similar traditions and live side by side. During the colonial period in Rwanda, the ruling Belgians favored the minority Tutsis, and gave them a range of advantages over the majority Hutus. They further divided the groups by requiring all Rwandans to carry identity cards that classified people by their ethnicity.

A Hutu revolution in 1959, supported by the Belgians, forced as many as 300,000 Tutsis to flee Rwanda, decreasing their numbers inside the country even further. In 1962, when Belgium granted Rwanda independence, the country was governed by political parties associated with the Hutu majority. Under Hutu rule, the Tutsis faced discrimination and violence, and thousands more fled to neighboring Burundi. It is estimated that by the mid-1960s, half of the Tutsi population was living outside Rwanda.

Meanwhile, extremist Hutu leaders were secretly drawing up lists of Tutsi and moderate Hutu leaders to assassinate, and arming and training youth militias, who were responsible for some small-scale massacres. These killings were documented by local and international human rights organizations as well as by a special envoy of the UN Commission on Human Rights. The Rwandan government said the killings were spontaneous and uncontrollable, and no one was brought to justice. The international community classified the violence as part of an internal conflict.

This civil war officially ended with the signing of the Arusha Accords, a power-sharing agreement, in August 1993. While Hutu leaders signed the agreement, its terms angered Hutu extremists, setting the stage for future violence. During this time, the extremists disseminated messages through the media telling their fellow Hutus that the Tutsis were planning a killing campaign against them. Radio RTLM, a private Hutu-owned radio station, relentlessly condemned Tutsis and their supporters, characterizing them as subhuman and calling them cockroaches. In this climate, beginning in 1993, Hutu political leaders began to import large numbers of machetes and distributed the weapons to the militias that supported them, the Interahamwe (“Those Who Attack Together”) and the Impuzamugambi (“Those Who Have the Same Goal”).

This page was last updated in September 2021.

Massacre of the Tutsi Minority Next