So Near, So Far Previous “I Feel a Great Sense of Fear” Next 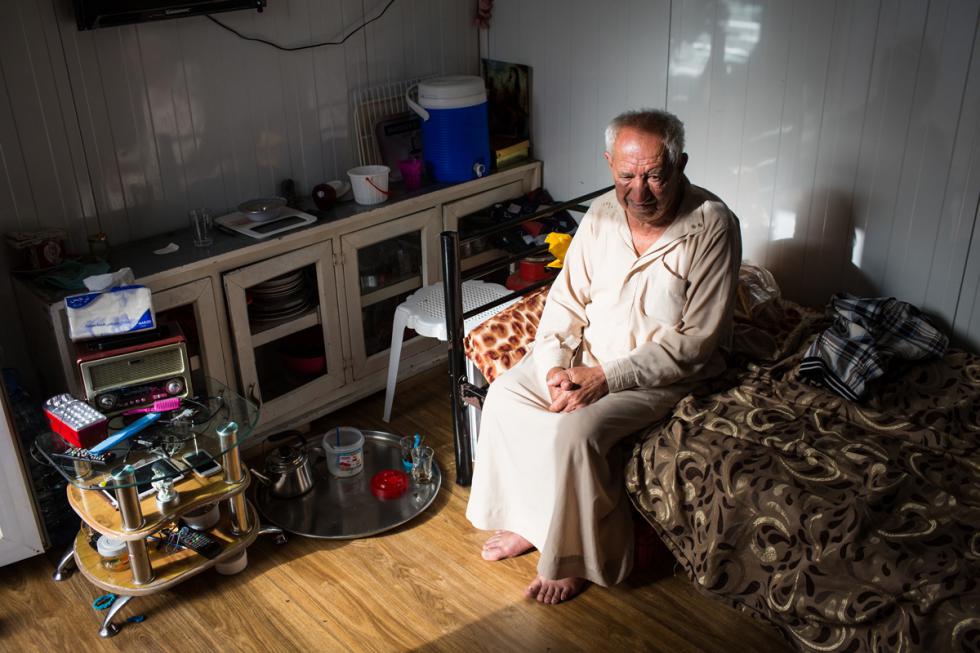 Ibrahim, who lost his home and shop in Mosul, sits on his bed with his belongings at a camp in Erbil. —Mackenzie Knowles-Coursin for the US Holocaust Memorial Museum

Ibrahim, a shopkeeper, and his wife were the only Christians living in their neighborhood in Mosul. They got along well with their Muslim neighbors. But when the self-proclaimed Islamic State (IS) captured the city in June 2014, Ibrahim was faced with a devastating choice: convert to Islam, pay a special tax, or leave his home.

Ibrahim, 70, sent his wife and children to Qaraqosh, 20 miles (32 kilometers) away. Many others did the same: they had second homes there or they thought it would be safer. It was typical for men to send their wives and children ahead. He hoped they would be able to return once the crisis passed.

For weeks, Ibrahim stayed behind as pressure on the Christian community in Mosul mounted. He agreed to pay the jizya—the special tax levied against Christians. But in the end, IS refused to accept the money and he left the city on July 19 along with most of Mosul’s remaining Christians.

Ibrahim joined his family in Qaraqosh. Even then he thought he’d only be gone a few days—he thought Iraqi troops would liberate Mosul. But that didn’t happen.

Ibrahim’s stay in Qaraqosh was brief. In early August 2014, less than three weeks after he arrived, IS swept through Qaraqosh as well. Ibrahim and his family were forced to flee again. He still hoped he could return shortly. But it was not to be.

Ibrahim and his wife, both of whom have cancer, live in a container in Ankawa, a predominantly Christian suburb of Erbil. Torn from their home, their business, their friends, and their community, they are trying to make a new life. For months, Ibrahim's former Muslim neighbors would call to ask if he was OK—but he has not heard from them since the phone lines were cut.

So Near, So Far Previous “I Feel a Great Sense of Fear” Next