The People of the Book and the Hierarchy of Discrimination Previous What Can Be Done? Next

The country now called Iraq has been a cradle of civilization since 4800 BC. The first systems of writing and of justice are believed to have originated in Sumeria and Babylon, now Iraq. The name “Iraq” derives from Arabic, meaning “the fertile.” This land has nurtured diverse religions and ethnic groups.

In just a few decades, that longstanding diversity has been almost erased. 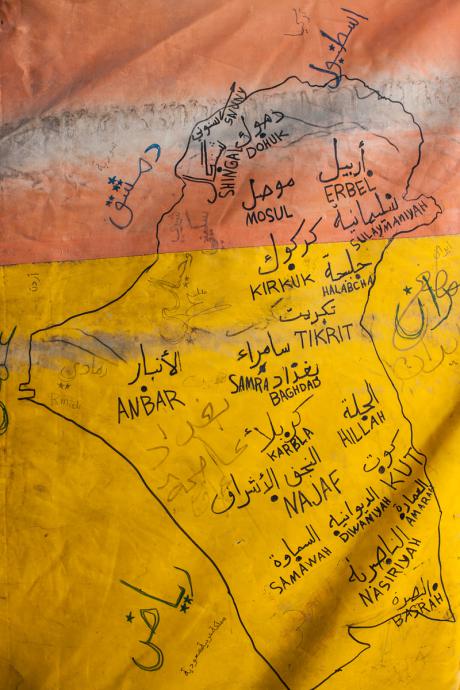 A hand-drawn map of Iraq on the side of a Yezidi family's tent at a displaced persons camp. —Mackenzie Knowles-Coursin for the US Holocaust Memorial Museum

Iraq’s minority communities include Christians, Shabak, Yezidis, Sabaean-Mandaeans, and Kaka’i. The majority of those people interviewed for this project said that the overthrow of Iraqi President Saddam Hussein in 2003 by US and coalition forces led to a rapid deterioration of the security situation throughout the country. Tens and possibly hundreds of thousands of Iraqis were killed in 2003 and 2004 by bombings, improvised explosive devices, and extrajudicial slayings, in addition to those killed as a result of the coalition’s military actions. Minorities also became the targets of religious extremists.

The self-proclaimed Islamic State (IS) used this period to intensify its presence and activities in Iraq and emerged as a leading threat to civilians. Known locally as Daesh, IS appealed to disenfranchised and disgruntled Sunnis while also recruiting foreign fighters. As a result, 2013 was the deadliest year in Iraq since 2008.

Many families were forced to make difficult decisions about whether they should move to the safety of Iraqi Kurdistan or leave the country all together. The Christian community in particular has experienced a mass exodus from Iraq. In 2003, a reported one million Christians lived in Iraq. By 2008, there were 675,000. Today, that number has shrunk to a little more than 300,000 (external link).

The Islamic State is the product of more than a decade of mass atrocities in Iraq, perpetrated in the context of a largely sectarian conflict that emerged following the war in 2003. Postwar attacks revealed the inability of the Iraqi government to respond to security threats facing Iraqi civilians and the complete impunity afforded perpetrators. Although the new government legally guaranteed the rights of minorities, those protections were rarely, if ever, enforced.

As one Sabaean-Mandaean man said, “Every day, every hour, we lived in fear that we would be killed.” We spoke with him in Erbil, where he and his family had moved from Baghdad even before the rise of IS sent a wave of exiles to join them.

The People of the Book and the Hierarchy of Discrimination Previous What Can Be Done? Next