The Khmer Rouge demanded unquestioning loyalty to the nameless and faceless regime that people knew simply as Angkar, or “the organization.” In Khmer Rouge ideology, loyalty to Angkar replaced all other forms—to parents, to family, to village, to religion. People deemed disloyal to it were to be “smashed,” a Khmer Rouge term for the weeding out and murder of enemies.

“It is better to arrest ten people by mistake than to let one guilty person go free.”

To this end, the Khmer Rouge created a massive security apparatus throughout the country, including nearly 200 prisons where inmates were interrogated, tortured, and executed. 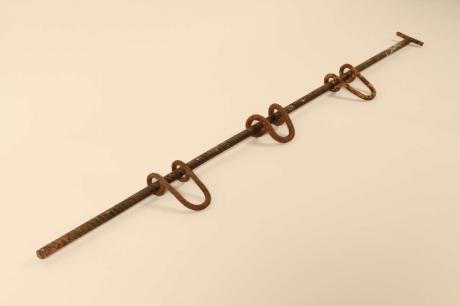 The Khmer Rouge’s definition of who was not “pure” and therefore had to be “cleansed” was broad. Cleansing could mean forcibly removing the “impure” from authority or detaining them in reeducation camps, but it often also meant killing them. Immediately after seizing power in Phnom Penh, the Khmer Rouge had shown their quickness to kill, executing surrendering leaders of the old government and thousands of low-level soldiers, police officers, and civil servants.

The Khmer Rouge executed hundreds of thousands of intellectuals, city residents, and religious practitioners. They singled out the country’s Cham and Vietnamese minorities for particular persecution. Often execution was by a blow to the head from behind. Bodies were dumped into mass graves in farm areas—the “killing fields”—and denied the cremation that is traditional in Buddhist society. More than 388 sites containing 19,733 mass graves have been identified from this period.

As time went on, the Khmer Rouge regime turned increasingly on its own members.