Public Participation Previous Can the ECCC Achieve True Justice for the Victims? Next 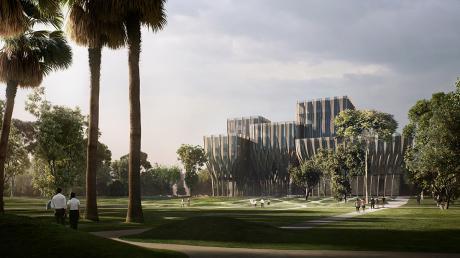 The proposed new Sleuk Rith Institute building in Cambodia will safeguard documentation related to the Khmer Rouge years and function as a center for the study of genocide. —Zaha Hadid Architects

Seeking justice for war crimes can involve more than a court passing judgment. Fostering healing for the victims, and for society at large, is also important.

In the aftermath of the Holocaust, German government authorities agreed to pay billions of dollars of financial compensation to victims and victims’ families for lives and property lost, but this method of redress remains unusual.

In their search for justice and healing for themselves and society, survivors of the Khmer Rouge’s reign have sought reparations. But in Cambodia, where tight budgets offer little chance of financial amends, the court has mandated “collective and moral reparations” that address victims’ needs. These projects include commemoration efforts such as memorials to victims, information centers at killing sites, and the designation of a National Remembrance Day. Reparation efforts also provide psychological services, education about the atrocities, and documentation of the crimes. Funding for these projects is provided by a diverse set of private and sovereign donors.

The Documentation Center of Cambodia (DC–Cam) is the nation’s primary archive of the Khmer Rouge era. Founded in 1994 with support from international institutions, it has gathered millions of documents, artifacts, and files from the Cambodian government, other institutions, and private donors. The DC–Cam staff, led by Khmer Rouge–era survivor Youk Chhang, rescues and cares for this evidence to help others search for the truth of what happened to them and their families, provide documentary evidence to the Khmer Rouge tribunal, and teach Cambodians about their nation’s history. 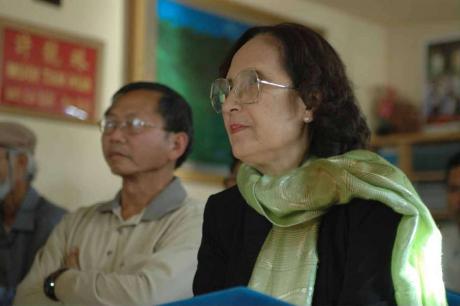 Sophany Bay lost her two daughters and son to the Khmer Rouge. In the United States, she has committed herself to helping survivors overcome the traumas they suffered. —ASRIC/Van El

In the United States, the Applied Social Research Institute of Cambodia and the Center for Justice and Accountability helped nearly 50 US survivors to testify about their experiences in court. In her 2013 testimony, Sophany Bay, a survivor, civil party, and mental health counselor, brought attention to the long-term psychological and physical suffering—often referred to as post-traumatic stress syndrome—of survivors and their families. Bay, who lost three children during the regime, continues to speak about her own loss and provide counseling in her San Jose community.

During the Khmer Rouge’s reign, traditional Cambodian music and dance were suppressed in favor of propaganda songs and skits meant to reinforce political ideals. Western-inspired film and pop music, considered decadent and corrupt, were rooted out. Musicians hid their talents or risked death. The 2014 documentary Don’t Think I’ve Forgotten: Cambodia’s Lost Rock and Roll traces the country’s vibrant pop music scene through the early 1970s to its destruction by the Khmer Rouge.

Today, Cambodia teems with cultural revival, demonstrating that the Khmer Rouge did not succeed in eradicating a way of life. Members of the Royal Ballet perform intricate dances that date to the ancient Khmer Empire. Phnom Penh hosts a vibrant music and filmmaking scene. Some of the movies recount the years of oppression; others just entertain.

Religion is also firmly reestablished. The country is dotted with newly built or repaired Buddhist temples. People of all ages burn incense and say prayers before images of the Buddha and flock to the temples for religious festivals. Monks officiate at weddings, funerals, and other major events. Fortune-telling and astrology, long important in Cambodian life, have made a comeback. Islam, the faith of the Cham minority, has also seen a rebirth.

Public Participation Previous Can the ECCC Achieve True Justice for the Victims? Next