Peace and Monarchy Return Previous A Tribunal for Cambodia Next

The overthrow of the Khmer Rouge left many survivors longing for justice for the crimes they and their families endured. But for decades, continuing war, political turmoil, and poverty conspired to block meaningful efforts based on rule of law.

One of the first actions that the government the Vietnamese installed in Phnom Penh took was to try Pol Pot and Ieng Sary, the Khmer Rouge foreign minister, although both men remained at large. Convened in August 1979, the “People’s Revolutionary Tribunal” heard testimony about widespread torture and executions. 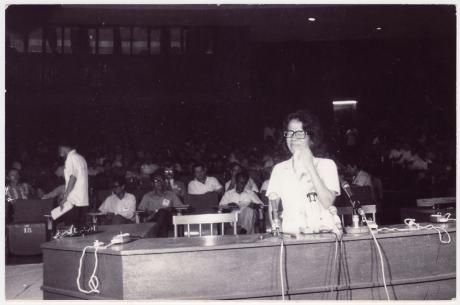 The People’s Revolutionary Tribunal tried Pol Pot and Ieng Sary in 1979, though neither man had been apprehended. —Documentation Center of Cambodia

The tribunal convicted the two leaders of genocide and sentenced them to death. However, the proceedings, which took only five days, lacked internationally accepted legal procedures and protections and instead bore the hallmarks of a Soviet-style show trial in which the verdict was a foregone conclusion.

In 1982 and 1983, hundreds of thousands of survivors of the Khmer Rouge regime wrote and signed petitions as part of a systematic effort by the pro-Vietnamese government to get the United Nations to acknowledge the atrocities of the Khmer Rouge and remove their representatives from Cambodia’s UN seat. 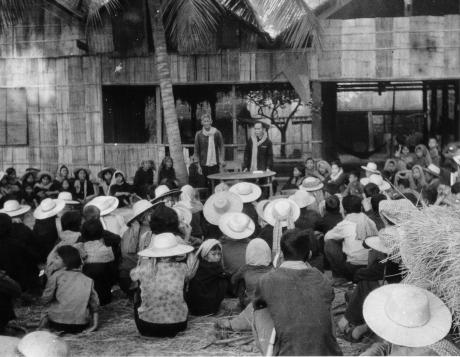 Villagers gather in 1982 for a meeting about the Renakse records. —Documentation Center of Cambodia

This vast collection of petitions is known as the Renakse records or “the million documents.” The petitions describe the suffering Cambodians endured during the Khmer Rouge’s reign and include such details as the number of people killed or missing in a particular village and the homes destroyed. They also detail methods of torture, locations of mass graves, and the desecration of Buddhist pagodas.

The government sent officials throughout the country to collect petition signatures—often just a thumbprint. Experts debate the evidentiary value of these documents, which were collected by a nondemocratic government for a specific political goal. Still, the petitions represent an early, large-scale effort by Cambodians to record their experiences under the Khmer Rouge.

Peace and Monarchy Return Previous A Tribunal for Cambodia Next