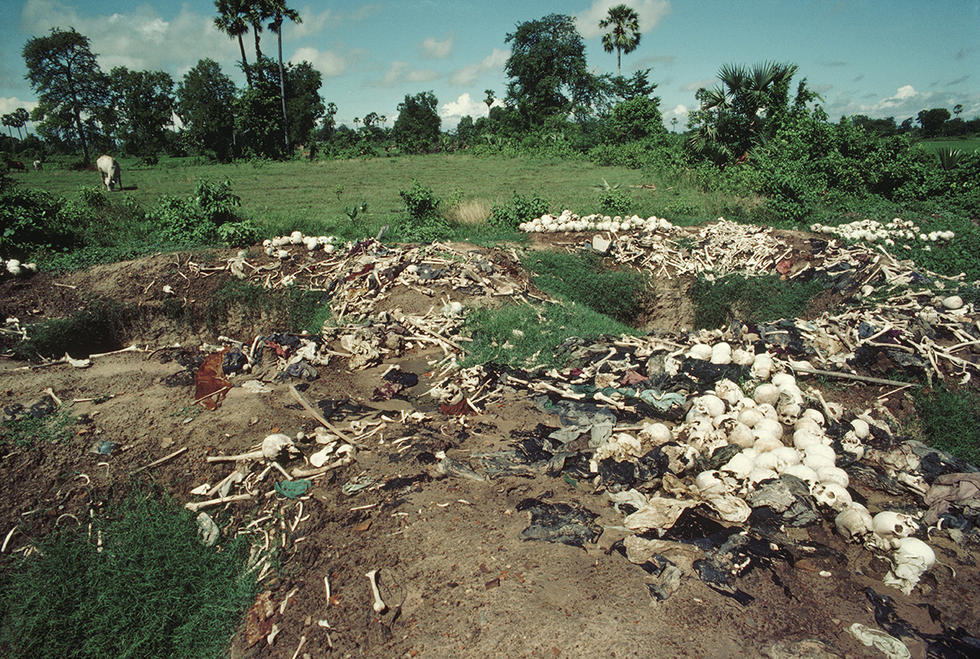 From April 17, 1975, to January 7, 1979, the Khmer Rouge perpetrated one of the greatest crimes of the 20th century. Nearly two million people died under the rule of the fanatical Communist movement, which imposed a ruthless agenda of forced labor, thought control, and mass execution on Cambodia. The purported goal was to transform the Southeast Asian country into a classless agrarian utopia. The result was an ancient society’s wholesale destruction and a horrifying new term for the world to confront: “the killing fields.”

The Khmer Rouge began their reign with the murder of surrendering officials of the former government and the brutal emptying of the capital and other cities. Black-clad soldiers marched millions of people into the countryside and put them to work as slaves digging canals and tending crops. Religion, popular culture, and all forms of self-expression were forbidden. Families were split apart, with children forced into mobile labor brigades.

Anyone who questioned the new order risked torture and death by a blow to the head. Ethnic minorities faced particular persecution. Not even members of the Khmer Rouge were safe. The movement killed thousands of its own as suspected traitors and spies for foreign powers. In time, gross mismanagement of the economy led to shortages of food and medicine, and untold numbers of Cambodians succumbed to disease and starvation.

An invasion by neighboring Vietnam finally toppled the regime. But a new civil war began and almost three decades passed before any Khmer Rouge leaders were brought to justice. In 2006, the United Nations and the Cambodian government inaugurated a joint tribunal known as the Extraordinary Chambers in the Courts of Cambodia (ECCC). So far it has convicted three defendants and sentenced them to lengthy prison terms.

The court functions not only to return verdicts but also to try to give some measure of peace and resolution to victims and to Cambodian society as a whole. Its proceedings are open to the public; victims can register as “civil parties” to question defendants during trial sessions and seek various types of reparations.

The court has drawn criticism for the high cost of operation and the low number of indictments. But whatever its flaws, it reflects a strengthening global consensus that, no matter how much time has passed, perpetrators of the modern era’s worst crimes must be brought to account, in a framework that helps survivors repair their lives.

The Museum is grateful to the Ministry of Culture and Fine Arts, Kingdom of Cambodia; the Documentation Center of Cambodia; and the Extraordinary Chambers in the Courts of Cambodia for their support and materials used in this case history.

This page was last updated in April 2018.