As the fog cleared on the morning of July 11, 1995, the Dutch peacekeepers stationed in Srebrenica looked to the sky, hoping for NATO airplanes. In previous days, the Serbs had overrun the UN observation posts set up on the southern front of the enclave, causing the peacekeepers to retreat. They called for close air support, but that day it came too late.

A little after 4 p.m., as more than 20,000 civilians fled to the Dutch peacekeepers’ base in Potocari four miles north, General Ratko Mladic, commander of the Bosnian Serb forces, walked through the deserted streets of Srebrenica and declared it a “gift” to the Serbian people.

Fearing what would happen to them if they stayed behind, upwards of 10,000 Bosnian Muslim men and boys set out on foot through the forest shortly after midnight, hoping to make it to the town of Tuzla some 30 miles away.

Meanwhile, in Potocari, the Dutch peacekeepers tried to act as a barrier between the thousands of civilians seeking their protection and General Mladic’s soldiers, but they did not have enough supplies nor were they authorized to use force.

On July 12, General Mladic told the civilians gathered outside the Dutch base that buses would take them to Muslim-held territory and that women, children, and the elderly would leave first. Serbian soldiers also told the Dutch peacekeepers the military-aged men and boys needed to be “questioned” in order to weed out Bosnian Muslim soldiers from civilians, following reports, they said, that Muslim soldiers had used Srebrenica as a base for attacks against surrounding Serb villages.

Over the next two days, more than 20,000 women and children were put on buses and sent to Muslim-held territory, eventually arriving in Tuzla, where a displaced persons camp had been established. 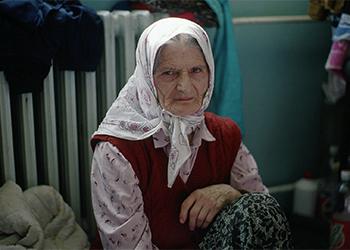 A refugee from the violence in Srebrenica, at a school near Tuzla. —Courtesy of UNHCR 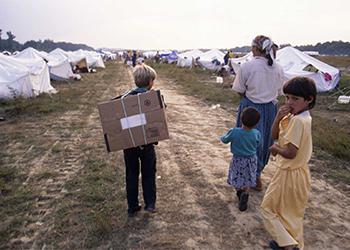 Muslims expelled from Srebrenica, at the Tuzla displaced persons camp. —Courtesy of UNHCR

Back in Potocari, Bosnian Serbs rounded up the remaining men and boys and sent them to nearby Bratunac. Those who had set out on foot through the forest were also met by Serbs at various checkpoints along the way, where hundreds were shot and killed and men farther back in the column were taken in large numbers.

By the end of the day on July 13, there were almost no males left in Srebrenica.

Map of the Srebrenica Massacre

Evidence suggests Bosnian Serbs held between 4,000 and 5,000 males in Bratunac in various locations around the town—in a warehouse, in an old school, in lines of trucks and buses, on a football field. The rest were either still on their way to Tuzla through the forest, or had already been killed during their journey or after surrendering in Potocari.

On July 14, 1995, Bosnian Serbs began their systematic execution of the men held in Bratunac, burying the dead in mass graves near the killing sites. Over the next few months they would attempt to cover up their crimes by reburying the remains in 33 different secondary sites.

The International Criminal Tribunal for the Former Yugoslavia (ICTY) estimates Bosnian Serbs killed between 7,000 and 8,000 men and boys during the week after the fall of Srebrenica, making it the largest massacre in Europe since the Holocaust.