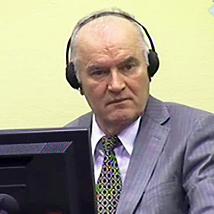 Bosnian Serb General Ratko Mladic on trial at the International Criminal Tribunal for the Former Yugoslavia. —Courtesy of ICTY

The International Criminal Tribunal for the Former Yugoslavia (ICTY) continues to search for the truth about what happened in Srebrenica and to hold the perpetrators accountable.

In 2001, the ICTY ruled that genocide had occurred. Setting new international precedents with its decisions, the court has handed down 80 sentences and indicted 161 persons for serious violations of international humanitarian law. And the trials continue.

Today, in the village of Potocari, the Srebrenica-Potocari Memorial and Cemetery for the Victims of the 1995 Genocide serves as a symbolic place marker in the town where so many saw their loved ones for the last time. Since its opening as a cemetery in March 2003, and the opening of its memorial room in July 2007, more than 6,000 remains have been reburied there after being exhumed from mass graves.

Every year, on July 11, thousands gather there to remember the innocent lives that were lost in Srebrenica and to challenge us, through their insistent presence, to work to prevent genocide in the future.

In July 2015, the Museum’s Simon-Skjodt Center for the Prevention of Genocide, in coordination with The Hague Institute for Global Justice and the National Security Archive, hosts a two-day conference to learn more about the international decision making surrounding the fall of Srebrenica and its lessons for the future. Learn More