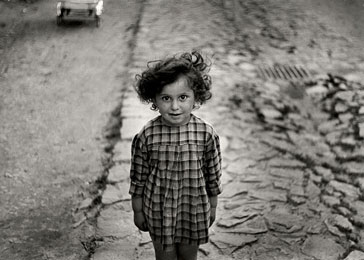 The photographer Roman Vishniac created some of the most iconic images of Jewish life in Europe before the Holocaust, documenting a world that would soon vanish. He also chronicled the rise of Nazism and the aftermath of World War II. However, the public has never had the opportunity to appreciate the breadth and depth of his work—of Vishniac’s 10,000 negatives, only about 350 have previously been published. The Museum has worked with the International Center of Photography (ICP) to put those images online and invites the public to help us learn more about Vishniac’s photographs.

Who was Roman Vishniac?

Roman Vishniac (1897–1990) was born to a Russian-Jewish family. He grew up in Moscow where he studied biology and zoology. Vishniac’s family left Russia after the revolution and, after completing his studies, he joined them in Berlin. There he pursued his passion for photography by documenting life in his new city.

As the Nazis rose to power in Berlin, Vishniac photographed the ominous changes in the city and also worked to document Germany-Jewish relief and social service organizations. In 1935, the American Jewish Joint Distribution Committee (AJDC) hired Vishniac to travel to Eastern Europe and take photographs documenting Jewish poverty and relief efforts to be used in its fundraising campaigns. In 1939, Vishniac pursued other AJDC assignments in Western Europe and worked as a freelance photographer there. After the German invasion of France, he was arrested and sent to an internment camp. With help from the AJDC and the remainder of his family’s resources, he secured release and immigrated with his wife and two children to the United States via Portugal in December 1940. They settled in New York, where Vishniac worked as a photographer, making portraits and documenting Jewish refugees and American-Jewish community life.

In 1947, Vishniac returned to Europe to document the aftermath of the war and the plight of refugees and those living in displaced persons camps. Back in the United States, Vishniac continued his work as photographer and scientist and became a pioneer in the new field of photomicroscopy.

Vishniac’s photographs of Jewish life in prewar Eastern Europe gained renown in the aftermath of the Holocaust and were used to illustrate numerous books. Many people today are familiar with his work from his book Vanished World (1983). However, the public saw only a small fraction of Vishniac’s work before his daughter, Mara Vishniac Kohn, entrusted his images to ICP and the Museum. This project makes them available to the public at large in hopes of learning more about the subjects of his photographs.

How you can help

Though Vishniac took thousands of photographs he only captioned a small fraction. By comparing his photographs to others in the Museum’s collection, Museum staff members have identified a number of people and locations, as you can see in this photo gallery featuring Vishniac photos and photos of the same subjects from the Museum archives. We invite you to view his full collection—spanning the prewar and postwar period—on the ICP website to help us make further identifications. If you recognize a person or a place, click the link below the photograph to generate an e-mail to Museum and ICP curators. Your efforts can help others learn about the vanished world documented by Vishniac.