Previous: Jews of the Spanish Homeland Next: Roundups 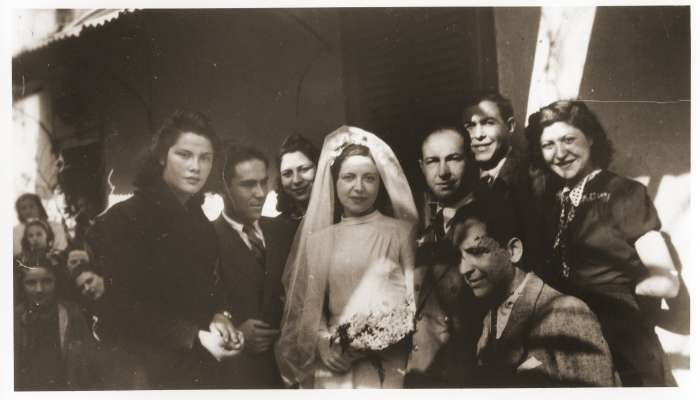 Photograph from the wedding of Victoria Sarfati and Yehuda Beraha in 1943. —United States Holocaust Memorial Museum #97785

In 1943, Victoria Sarfati and Yehuda Beraha hastily arranged their wedding in German-occupied Salonika to enable them to stay together during the uncertain times that lay ahead. A short time after this photo was taken, the newlyweds were deported to their death in Auschwitz.

Their wedding picture was preserved by Yehuda’s brother and sister, Jaco and Miriam Beraha, who gave a copy of this and other family photos to the Museum in the late 1990s. Jaco, Miriam, and her husband Samuel Rouben escaped from the Salonika ghetto in late February 1943, three weeks before the start of the deportation actions. They found refuge at the local Italian consulate. Sympathetic consular officials provided them with Italian papers and train tickets to Italian-controlled Athens, where they were sheltered by members of the Greek Orthodox underground for the duration of the war.

Previous: Jews of the Spanish Homeland Next: Roundups