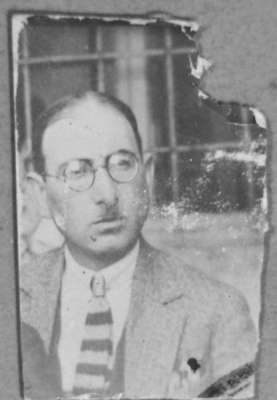 On March 11, 1943, within a few days of the departure of the first deportation trains from Salonika, the 3,276 Sephardi Jews of the Macedonian city of Bitola (Monastir) were rounded up by Bulgarian occupation authorities. They were imprisoned at a tobacco factory warehouse in nearby Skopje, along with almost 3,800 other Macedonian Jews. Three weeks later, all but a few had been deported to their death in Treblinka.

One of those deported to Treblinka was Solomon Nehama of Bitola. His photograph was recently discovered in the Museum’s Photo Archives Branch by his nephew, Dr. Isaac Nehama, a survivor from Athens now living in Bethesda, Maryland. Hoping to help other descendants of Bitola Jews identify their relatives, Nehama volunteered his services to the Photo Archives and took on a year-long project to transcribe, translate, and cross-reference a collection of more than 1,400 ghetto portraits of Bitola Jews copied by the Museum from the State Archives of Macedonia.