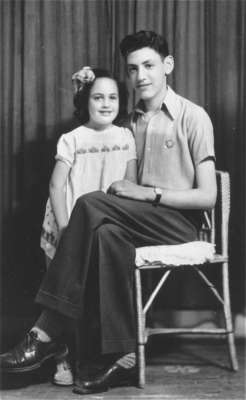 Thirteen-year-old Norbert Yasharoff from Sofia, Bulgaria, witnessed the deportation of his co-religionists from Bulgarian-occupied Macedonia in what he recently described at a 2003 Holocaust commemoration at the Magen David Sephardi synagogue in Rockville, Maryland, as “one of the most traumatic experiences of my life.”

“I went with my father and a group of other Jewish leaders, including doctors, to Sofia’s main railway station where we tried to ease the suffering of the Macedonian and Thracian Jews who had arrived there locked like cattle in box cars on their way to the death camps in Poland. What we saw there was beyond description: men, women and children crying and begging through the narrow crevices of the box car doors for help and, above all, for water. We had brought water, food and blankets, but the Bulgarian guards prevented us from delivering any of those supplies and ordered us to disperse.” — Norbert Yasharoff

Two months later, Yasharoff and his family were exiled from their home, along with the entire Jewish population of Sofia. He described the nerve-wracking weeks leading up to the expulsion in a letter written one month after his resettlement to the provincial town of Pleven. He wrote the letter to his older cousin (respectfully addressed as uncle) Narcisse Barouch, who was then living in a forced-labor brigade encampment elsewhere in Bulgaria.

“Having witnessed what I think is the most trying period in the history of Bulgarian Jews, I am still haunted by the terror of that night, the night of May 22-May 23. As darkness fell, the rumor of an impending roundup and forced transfer to Poland spread like bush fire among the Jews of Sofia. Resigned to all the other blows that fate had visited on them in recent months, these poor people were desperately clinging to one last hope – the hope to survive… In our own home, we spent the night in sleepless silence. Huddled in the living room, we were all thinking the same gloomy thoughts, but none of us expressed them… Suddenly, he [father] shook his head and burst out crying. With a quivering voice, he told Odette and me that the time may come when, in order to save us, mother and he could be forced to leave us in the care of others.” — Norbert Yasharoff

This letter, which is one of the very few eyewitness accounts of the Holocaust in Bulgaria, was long assumed by its writer to have been lost. But during a 1989 visit to cousin Narcisse’s widow in Tel Aviv, Yasharoff recovered the 1943 missive. In 1990 he donated it to the Museum along with a rich collection of personal papers. Since that time Yasharoff has served both as a consultant on Balkan Jewry to the Museum’s Permanent Exhibition design team and a volunteer translator in the Museum’s Archives Branch.