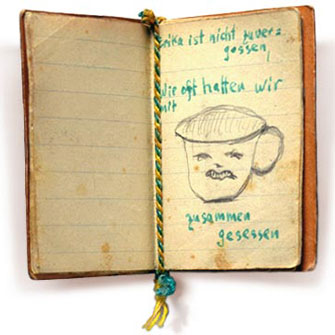 Translation: We must remember Erika and all the times we sat together.

Erwin’s sister, Erika Tichauer, sometimes joined Erwin, Manfred, and Gad for some friendly coffee talk whenever their work schedules permitted it. The “bourgeois” setting of cafes was now strongly forbidden for Jews, a mere memory. Here, Manfred makes a joke by drawing Erika’s face on a chamber pot.

By 1942, deportations had further decreased the size of Berlin’s Jewish community. The He-halutz group reacted by becoming more political. This created conflicts between the generations. Gad’s father, for example, was totally against Zionism. Other parents thought the group was OK, as long as its focus was “play,” not politics.

In January 1942 the Nazis held the secret Wannsee Conference near Berlin. Its purpose was to coordinate the murder of the Jews of Europe.

We do not know much about Erika Tichauer. She was born on October 16, 1923 in Berlin; Gad remembers her as a very active girl with whom they had lots of fun. On March 1, 1943, she was deported to Auschwitz. She did not survive.