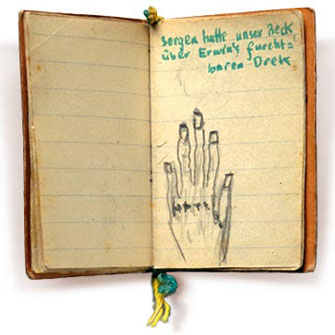 Translation: Our Beck worried about the greasy mud Erwin had to work with.

Erwin Tichauer, who introduced Gad to the He-halutz group, worked with Gad at a carton factory together with other Jewish and foreign forced laborers. Erwin’s daily duty of cleaning the greasy cutting machinery left him with dirty fingernails, illustrated here by Manfred. In October 1941, the first deportation train left Berlin for the East. Tichauer was deported to Auschwitz in 1943, but survived. 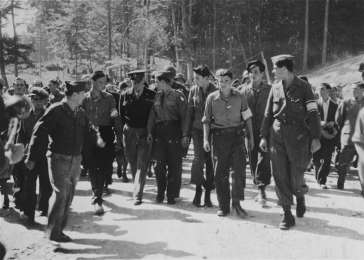 Erwin Tichauer (1918–1996) was born and raised in Berlin. After completing the Jewish Gymnasium in 1938, he was unable to continue his academic education due to Nazi restrictions. On February 27, 1943, he was arrested along with 11,000 other Jews and conscripted for forced labor in Berlin. Over the next few days, 7,000 of that group were deported to Auschwitz. Erwin was transferred to Jawischowitz, a subcamp of Auschwitz, where he survived. This photo shows him leading General Dwight Eisenhower through the displaced persons (DP) camp of Feldafing, in Bavaria, in September 1945. Tichauer subsequently immigrated to Australia, Chile, and eventually the United States where he had a distinctive career in biomechanics and ergonomics.

In a letter of March 1942, Jizcak Schwersenz described how Erwin Tichauer reacted to the ongoing deportations during a secret gathering of Zionist youth in Berlin in 1942: “Then one of our members, Erwin Tichauer, stepped forward—at first we had no idea what he was about to do —and read to his group the names of all those who had been taken from us during the past months, since the deportations had begun, and as he read each name the members replied as one: 'Here', that is to say, that even those who were missing were with us on this occasion, for we are always with them in our thoughts, just as they are surely with us in their thoughts...” 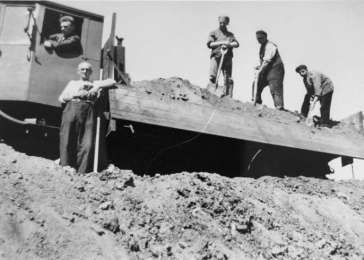 In July 1941, there were approximately 26,000 to 28,000 Jewish forced laborers in Berlin. Many of them were forced to work in war-related industries along with non-Jewish foreign civilian workers and prisoners of war (POWs). There were approximately 3 million foreigners in Germany in 1941, and most of them worked in the agricultural sector. By 1943, 5.7 million civilian workers and 2 million POWs from several nations were working for the German Reich. In February 1943, Hitler ordered the roundup of all Jewish laborers in Germany and most of them were deported during the following weeks and months. Until that time, Jewish forced laborers in war-related industries had been exempt from deportation.