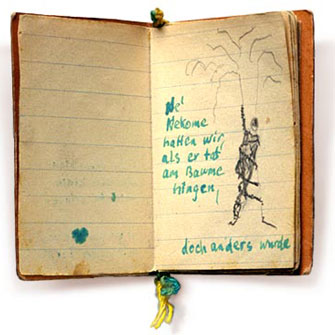 Translation: Oh, we made fun of him when he was hanging there tied to that tree, but I felt differently...

Despite the increasingly restrictive anti-Jewish laws, Gad and Manfred’s youth group continued to meet in safe places in the homes of individual members or once on the roof of the Jewish school. They also played in remote wooded places on the outskirts of Berlin, where they enjoyed scout games such as hide-and-seek or tying someone to a tree (in this case, Gad, as Manfred illustrated here). Even these interludes soon ceased. Time became scarce. After March 1941, all Jews over the age of 14 were ordered to do forced labor for German companies. 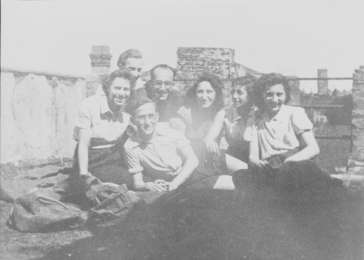 Manfred took this photo on the roof of Artillerie Strasse 14, where the Jewish school was relocated after the building at Choriner Strasse 74 was damaged by a bomb. Gad remembers: “We had packed food, sleeping bags, a guitar. It was the only alternative we had to a 'field trip,' since we were no longer allowed to go on outings of Berlin.” He also remembers that he and Manfred fell in love during this outing. From left to right: Lotte Kaiser (who led the group), Schlomo Levin (Manfred’s brother), Jizchak Schwersenz (director of the Jewish School, with Gad in the foreground).

Born in Berlin in 1915 as Heinz-Joachin Schwersenz, Jizchak Schwersenz was one of the leading figures of the Zionist youth movement. In 1939 he became the director of the Jewish school on Choriner Strasse. After the school was closed by the Nazis, he worked for the Jewish public kitchen that prepared meals for the assembly camps in Berlin where deportees were gathered. Urged to do so by his friend Edith Wolff, Schwersenz was the first Jewish leader to go underground when he received his deportation order in August 1942. He continued his work and led the illegal Zionist group, “Chug Chaluzi.” It was his idea to change the group members’ German names into Hebrew ones: Gert became Gad, Gad’s sister Margot became Miriam, and Manfred’s new name was Meir. Schwersenz escaped into Switzlerland in early 1944.

On the roof of the Jewish school 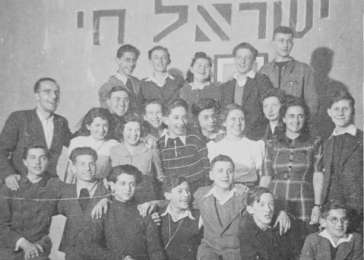 The Jewish school was founded in 1936 by the Jewish community to accommodate the increasing numbers of youth who wanted to join the He-halutz to train for immigration to Palestine. Even though Jewish youth groups were prohibited in 1936, the Jewish school (also known as the Youth Aliyah school) was tolerated most of the time by the Nazis because it prepared Jews for emigration. In May 1939, Jizchak Schwersenz became its director. When the Nazis prohibited Jewish emigration in October 1941, they closed the Jewish school.