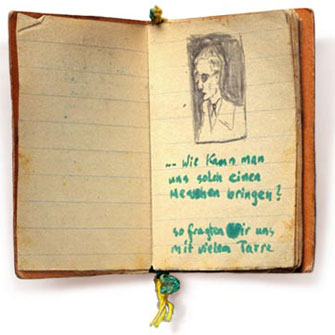 Translation: ... How could anyone bring us someone like this? We asked ourselves in fits of laughter.

When Gad joined the He-halutz youth group in 1940, its members immediately thought of the 19-year-old lover of city life and cafes as too 'bourgeois.' The other members, including Manfred, preferred typical youth group outdoor activities such as hiking, camping, and sports.

Gad might not have joined such a group if it weren't for the political situation. Having been excluded from German mainstream life since the Nuremberg racial laws were passed in 1935. Gad and many other German Jews turned to their own cultural and religious groups. Zionist youth groups such as Gad and Manfred's He-halutz group prepared their members for emigration to Palestine and created a strong sense of community.

By the time the Nazis came to power, Jewish youth movements in Germany ideologically consisted of two branches: groups with a strong orientation toward the German youth movement, and Zionist youth groups (religious and secular) including the secular He-halutz (pioneer) movement, whose major goal was preparing young people for emigration to Palestine. The international He-halutz movement began during World War I. In 1935, 4,500 youth in Germany were trained in He-halutz centers, particularly in agriculture.

Nazi policy on Jewish youth organizations was not consistent, but often was aimed at isolating them from German youth groups, and discouraging their efforts in support of Jews staying in Germany. Zionist groups often were tolerated or even encouraged since they supported and provided training for emigration. In 1936, the Nazis prohibited all non-Zionist groups, which led to considerable growth for the Zionist youth movement. During that year, membership rose to approximately 50,000 young Jews in Germany. The Zionist youth groups maintained their own way of life, including their physical, social, ideological, and cultural activities, despite deteriorating conditions and restrictions imposed on Jews.

Interview with Gad Beck
“For them I was a boy from outside. Why? I was visiting theaters, I was dancing, even ballet dancing. For such a group of pioneers it was impossible to believe this. Just in such a situation, political situation... I had never been in such a group, if there was not Hitler, this is clear. But I had no other way, I had to come with other people together, with these Jewish people together and the Zionist Jewish people together. ... I was coming from another world, I was coming more from the world from theater, from culture, from [sigh].” 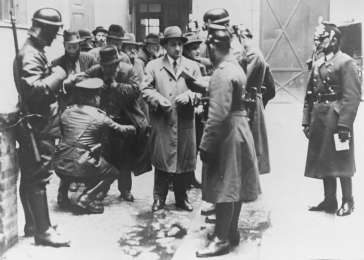 In 1933, new German laws forced Jews to quit their civil service jobs, university and law court positions, and other areas of public life. In April 1933, a boycott of Jewish businesses was instituted. In 1935, laws proclaimed at Nuremberg stripped German Jews of their citizenship even though they retained limited rights. These “Nuremberg Laws” defined Jews not by their religion or by how they wanted to identify themselves but by the religious affiliation of their grandparents. Between 1937 and 1939, new anti-Jewish regulations segregated Jews further and made daily life very difficult for them: Jews could not attend public schools, go to theaters, cinemas, or vacation resorts, or reside, or even walk, in certain sections of German cities.