Previous: Page 16 Next: Back Cover 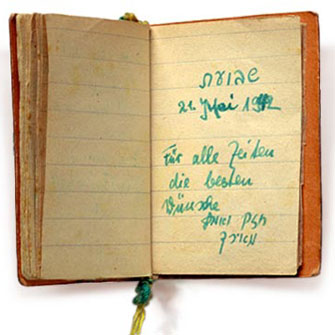 Translation:
Shavuot May 21, 1942
Forever my best wishes are with you. Meir Levin

After the war, Gad searched for Manfred. He learned that the entire Lewin family was murdered in Auschwitz. “I never really got over the loss,” wrote Gad. “Years later, Manfred’s name still electrified me—even in the Hebrew form, Meir.” 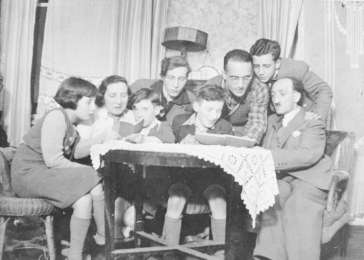 Manfred, his sister Caecilie, and his parents Arthur and Jenny were deported on the number 23 transport to Auschwitz, along with 976 other Jews on November 11, 1942. Manfred’s brothers Schlomo and Rudolf remained in the Grosse Hamburger Strasse assembly camp, but were deported on February 19, 1943. All of them were murdered in Auschwitz.

Interview with Gad Beck
QUESTION: Can you describe Manfred for us, how did he look?
MR. BECK: In the picture here, in the book we have a picture.
QUESTION: Yeah, but if in your memory can you describe him?
MR. BECK: No, my love to Manfred was a real love from the heart, not from the eyes. I didn’t, he was not beautiful, he was not even interesting. He was a very simply, charming, full of charm, young man. No…I never was thinking about this even. I can’t, I see him like this picture, it was the last picture from him. No, even though, he, this face, just this face is here in my head.

Previous: Page 16 Next: Back Cover