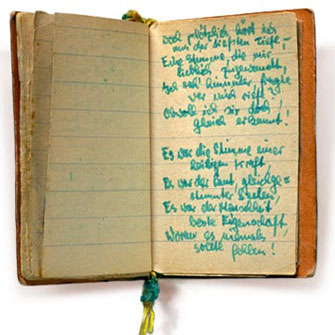 Translation: But suddenly from the blackest depths / A gentle voice came echoing / Looking down I wondered who might / be calling out to me / Although the voice was one I knew at once! / It was the voice of a sacred power / It was the sound of souls in harmony / It was the essence of our humanity / The quality we must never lose.

Gad remembers giving a ‘Heil Hitler!’ salute as he entered the chaotic assembly camp at Grosse Hamburger Strasse, part of which was the site of the former Jewish school where Gad had once been a student. “The Jew Manfred Israel Lewin was brought here yesterday,” Gad said to the SS Obersturmbannführer (Lieutenant Colonel). “He worked for us and is a saboteur! He has the keys to several of the apartments we are renovating.” Manfred was summoned.