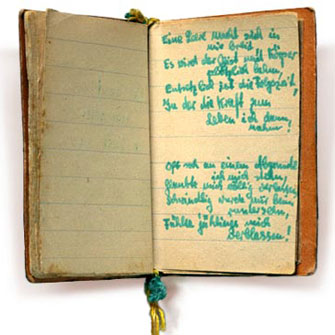 Translation: A void opens within me / Spirit and body suddenly are lame / The time that follows is torture / In which I seek out the strength to go / on living. / Often I see myself standing at the / edge of an abyss / Felt my utter abandonment / And the dizziness when I left my eyes / look down / And the sudden draining of blood / from my cheeks.

Gad, desperate for a way to save Manfred, remembers visiting Manfred’s boss, Lothar Herrmann. To Gad’s surprise, Mr. Herrmann lent Gad his son’s Hitler Youth uniform. He recalls putting on the baggy uniform and going to the assembly camp in hopes of rescuing Manfred and convincing him to go into hiding.

The lyrics on this page suggest that Manfred felt afraid and desperate, but if that were the case, he did not share those feelings with Gad. Gad remembers Manfred as being calm and strong when they were together. 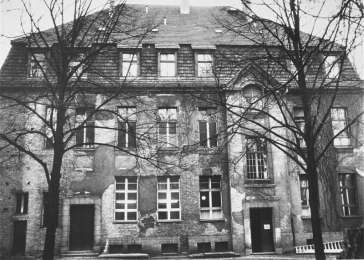 Since 1672 the oldest Jewish cemetery in Berlin had been at Grosse Hamburger Strasse 26. A Jewish retirement home was established nearby in 1828. At the end of 1941 the Nazis established an assembly camp at the site of the retirement home and the former Jewish school, and in the process destroyed the cemetery. The building of the former retirement home was destroyed in 1943, and the school building was used as an infirmary during the last months of the war. The camp at Grosse Hamburger Strasse became the central assembly point in Berlin from which Jews were deported.

Only an estimated 1,400 to 1,750 Jews survived in hiding in Berlin. Without the help of non-Jews, it would have been nearly impossible to obtain places to stay, food rations, and identification. False ID certificates and money were essential to survive underground.