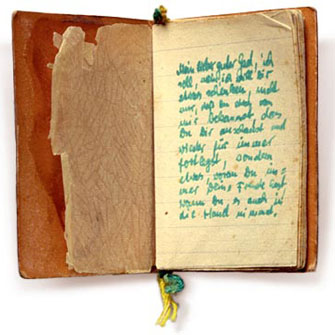 Translation: Dear, kind Gad, I owe you a present, no, I want to give you one, not just so that you get something from me that you can glance through and then lay aside forever, but something that will make you happy whenever you pick it up.

Gad and Manfred sometimes would spend the night together on cots in the basement of the Jewish school in the Choriner Strasse, as part of an obligatory air raid patrol. One of these evenings, Manfred gave Gad his book. Manfred wrote and made this book because he wanted to give something meaningful to Gad, who wrote poems. Gad was touched by the gift, though he was initially critical of Manfred’s lyrical writing style. Later, Manfred’s words took on new meaning. 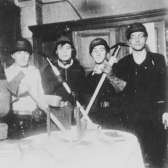 Jizchak Schwersenz, director of the Jewish school at Choriner Strasse 74, and three of his pupils carry helmets, tools, and books for their obligatory air raid patrol shift in early summer 1941. All public buildings in Berin had to be patrolled. Gad and Manfred began their shifts in late summer 1941, after the school building had been evacuated due to bomb damage.

After the war, many streets disappeared or their names were changed. The Choriner Strasse still exists today, but the former Jewish school has been replaced by a modern apartment complex.

Touched by the gift

Interview with Gad Beck
MR. BECK: “It was very interesting. He was not so sure this would be the right gift for me. It’s very simple book, booklet, very simple. … and he’s not an artist. So he gave me this paper and said to me, 'Later, look later, what I gave you in this moment.' I took it with me, and I’m not sure, even if I know I’m not sure. In the same evening I didn’t read this book, just in the morning. I was alone Ah!.... and I remember he have me something. And so I was, I read this book.”
QUESTION: “What was your first impression?
MR. BECK: The impression was not so deep like in this moment, because I didn’t, I couldn’t understand what will be our next future. So this book said to me, some wonderful words coming from his heart, not more. He was a very poor boy, they had no money. And most of the money they had was only going for food. He wanted to bring me something from his spirit. It was very spiritual gift for me.”