Deaf Victims of Nazi Persecution and the Holocaust

The experiences of deaf people in Nazi Europe constitute a neglected chapter in the history of the Holocaust. Deaf Jews faced the same traumas as hearing Jews: discrimination, persecution, deportation, and mass murder like other victims and survivors of the Holocaust. Nazi policy also specifically targeted people with disabilities—including non-Jewish deaf individuals—and societal prejudice about the perceived intelligence of persons with hearing disabilities led many to be institutionalized or even forcibly sterilized.

A small number of deaf Germans were murdered within the framework of the Nazi “euthanasia” program, a program of mass killing directed at persons with disabilities. Deaf people who tried to immigrate to the United States faced obstacles from immigration authorities, and those who managed to do so were often detained for months due to concern that they would be a burden on the state.

Deaf victims of the Holocaust have a unique history that needs to be preserved. It is crucial that the Museum rescues and preserves this evidence while there is still time—before survivors and witnesses are no longer around to tell their own stories. To learn more about donating evidence about the deaf experience in Nazi Europe, visit Donate to the Collections.

Doris, a Polish Jewish deaf survivor who later became blind, describes growing up in Tarnopol, Poland (now part of Ukraine). During two interviews, Doris describes her life before the war; having to hide the fact she was deaf; seeing the mistreatment of other deaf people; and how she was blocked from going to the United States. 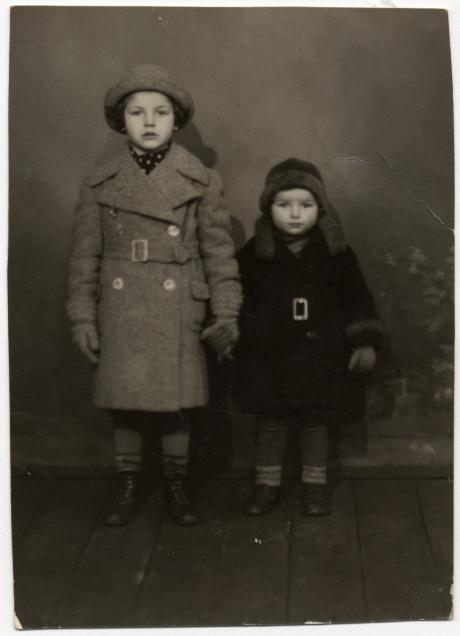 Portrait of sisters Nelly and Lilly Rattner, wearing coats made for them by their uncle Richard, a tailor. —US Holocaust Memorial Museum, courtesy of Hilda Wiener Rattner. View in Collections

Lilly, an Austrian Jewish survivor, discusses her childhood in Nazi occupied Vienna; her deaf mother (Hilda Wiener Rattner); her family's escape from Austria during the night in April 1940 and taking a train to Italy; sailing to the United states on the Rex; hiding jewelry and gold in their clothing; their detainment on Ellis Island; and their eventual entry into the United States.

This collection's record contains one interview conducted in American Sign Language with an English voiceover.

David Bloch was interned in Dachau concentration camp in 1938. With the help of his brother in the United States, he escaped from Germany to Shanghai in 1940.

The collection consists of artifacts, documents, and photographs relating to the experiences of Max and Rose Feld, a deaf Jewish married couple in Paris, and their daughter Esther. Rose and Esther survived the Holocaust in hiding. Max was first arrested and interned in the Beaune-la-Rolande camp, where Rose could occasionally visit him, but he was eventually sent to Auschwitz and murdered.

Hans, a deaf German Jew, and his parents escaped Breslau, Germany, for Shanghai in 1939 on the Italian ship, Conte Verde.

This small leather tag containing a photograph belonged to Irene Schweitzer, who fled Germany on a Kindertransport with her 6 year old son Hans in July 1939, joining her husband in England. Irene was allowed to accompany Hans on the Kindertransport because he was deaf.

Hilda Rattner was issued a German passport in 1939 for herself and her two children and it was noted by the Nazis on the right hand page that she is "taubstumm", or deaf and dumb. Her daughter Lilly Rattner Shirey was also deaf and is featured above.

This collection includes papers on Rosa Ohs, a deaf Jewish woman in Prague, including several notebooks of her handwritten poetry. Rosa became deaf at the age of 17 as a result of scarlet fever. Her daughter, Louise Goldschmied, and Louise's husband and child were able to flee to the US with the help of the Unitarian Service Committee and Martha and Waitstill Sharp, but they did not succeed in obtaining a visa for Rosa. She was killed in Treblinka on October 15, 1942.

Edited by Donna F. Ryan and John S. Schuchman, this book was inspired by the conference "Deaf People in Hitler's Europe, 1933-1945," hosted jointly by Gallaudet University and the United States Holocaust Memorial Museum in 1998. The  collection is organized into three parts and integrates key presentations and important post conference research.

These proceedings contain the most important findings from the 2006 conference, "Overcoming the past, determining its consequences and finding solutions for the present: a contribution for Deaf studies and sign language education."