Shankar Vedantam has spent a lot of time thinking about the links between science and human behavior. His recent book, The Hidden Brain, challenges us to consider the unconscious biases we may carry, and the ways they steer our behavior. 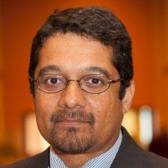 Shankar Vedantam has spent a lot of time thinking about the links between science and human behavior. His recent book, The Hidden Brain, challenges us to consider the unconscious biases we may carry, and the ways they steer our behavior.

ALEISA FISHMAN:
NPR science correspondent Shankar Vedantam has spent a lot of time thinking about the links between science and human behavior. His recent book, The Hidden Brain, challenges us to consider the unconscious biases we may carry, and the ways in which they steer our behavior.

Welcome to Voices on Antisemitism, a podcast series from the United States Holocaust Memorial Museum made possible by generous support from the Elizabeth and Oliver Stanton Foundation. I'm Aleisa Fishman. Every month, we invite a guest to reflect about the many ways that antisemitism and hatred influence our world today. From Washington, DC, here's Shankar Vedantam.

SHANKAR VEDANTAM:
The "hidden brain" is a metaphor. It's hidden from us. We're not aware of the hidden brain in our everyday interactions. And yet the hidden brain helps us connect with people around us. It helps us make everyday judgments. But there are times when the hidden brain leads us astray and we need to pay attention to those times or else our behaviors will not align with our intentions and values.

One of the enduring effects that the hidden brain has is in our social relationships. We are all drawn to people who are part of our groups. We have loyalties to people who are members of the same religion or the same nationality, fans of the same sports team. And these things bind us to one another, and as human beings that's vitally important. But there is a downside to that, which is the same factors that bind us to one another can also prompt us to hold groups that are outside at arm's length or to view them through a lens which is not a positive lens or even a benign lens. These biases, which begin by being very innocuous—you could almost argue "harmless" at the individual level—translated to the national or international level, they can become really deadly.

So, I mean, a common illusion that has dogged us since the days of the Holocaust is that the Holocaust was the work of one crazy person and a handful of people around him. And that explanation, I think, is profoundly unsatisfying to me, because it doesn't get at the scale at which bias is actually occurring. It's easy in some ways and comforting in some ways to say, "The Holocaust can entirely be laid at the feet of Hitler and the Nazis." And I think in many ways that lets not only large numbers of people in Europe and the rest of the world at that time off the hook, it lets us off the hook. Because it suggests that there's nothing that we have to be concerned about, because we're not psychopaths, we're not Nazis, our names are not Hitler, and so the Holocaust really has nothing to do with us.

I'm not necessarily sure I have a one size fits all answer for how to dismantle antisemitism around the world. But I will say that a lot of the research into unconscious bias has produced a picture of prejudice and discrimination that really is at odds with the way most people think prejudice and discrimination actually happens. In the way we conventionally think about prejudice, we think about it as an act of active, overt, deliberate hostility. But that kind of active animosity is actually not the norm for most biases in most parts of the world. The larger problem in many ways is someone saying, "I don't have any prejudices at all. I'm a completely good person." But now, in ways large and small, in ways subtle and not subtle, you act in ways that actually are biased. That you decide your policies supports some groups versus other groups. The money that you give for charitable donations helps some people, but doesn't help other people. And even though those are much more trivial forms of prejudice than somebody who's burning down a house of worship, I would argue in the long run, it's those unconscious biases that are actually much more potent because those biases are actually multiplied by tens or hundreds of millions of people. And so now you have these very large cultural forces, which now move in one direction or another.

The propensity of human beings to form groups, to form tribal loyalties, to form even animosities to people who are from different groups is probably wired into the brain at some level. So the idea of doing away with bias is, I think, it's a fool's errand. I don't think it's actually workable. But once you admit to the possibility of unconscious bias and you admit to the possibility that you, yourself, are vulnerable to these biases, the question is what do you do about them. When it comes to, for example, group identities and group loyalties, there are ways to craft group loyalties that include larger numbers of people rather than smaller numbers of people. So, for example, crafting a sense of national identity that we are all Americans is a very powerful way to overcome prejudices that are tied with race or with class. But there's also the case that we can shape the norms with which people behave. So I think in many schools now there are very explicit attempts to shape how children think and to pay attention to group dynamics and say, "It's not okay for you to make fun of someone because they happen to be from a different country or because they happen to have a different sexuality," engendering from a very young age the sense that we are in this together, that it's not okay to do it. Those norms, I think, can have a very powerful affect on people. So you're not doing away with the biases. The biases might still exist, but what you do with those biases changes.

One of the things that people have learned about the way the hidden brain works is that it's a largely unthinking system. It's really happening under the level of conscious awareness. And the reason we form those biases in the first place is not necessarily because someone has sat down and told us, "You need to hate this other group," but in ways large and small we see lots of little pieces of evidence that tell us that some groups hold positions of dignity, other groups don't hold positions of dignity, that some groups are responsible for bad things happening. And over time, we internalize those messages very gradually, but they become in effect in our minds…they take the force of rule. And a lot of us are carrying around these biases that we've learned in very early childhood and, because they are unthinking biases, we don't challenge them, because we don't even know they exist.

One of the things that writing this book has taught me is to have a certain amount of humility. That the sense that I have, the deeply held sense that I have that I'm a good, kind, upstanding, honorable person is true for the most part, but there are times when I don't act in the best interests of other people, that I act in self-centered ways or maybe I help one group more than another group. And being aware of the hidden brain now tells me to step back and say, "What I really want to do is to help the largest number of people." And so I end up trying to make those judgments now with more deliberation and with perhaps, you know, more of what I would like to call a conscience.