The history of Jews in the United States, as well as her own life experiences, have demonstrated for Hannah Rosenthal that coalition building is critical to affecting change around the world. 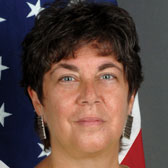 The history of Jews in the United States, as well as her own life experiences, have demonstrated for Hannah Rosenthal that coalition building is critical to affecting change around the world.

HANNAH ROSENTHAL:
I try to make it a practice when I see incidents of hatred towards others, I speak out. And when I see hatred against Jews, I ask others to speak out. Because it's the right thing to do and out of enlightened self interest.

ALEISA FISHMAN:
In 2009, Hannah Rosenthal was appointed as the U.S. State Department's Special Envoy to Monitor and Combat Anti-Semitism. The history of Jews in the United States, as well as her own life experiences, have demonstrated for Rosenthal that coalition building is critical to affecting change around the world.

Welcome to Voices on Antisemitism, a podcast series from the United States Holocaust Memorial Museum made possible by generous support from the Elizabeth and Oliver Stanton Foundation. I'm Aleisa Fishman. Every month, we invite a guest to reflect about the many ways that antisemitism and hatred influence our world today. From her office in Washington DC, here's Hannah Rosenthal.

HANNAH ROSENTHAL:
I approach my job here at the State Department as one that I try and chronicle what's going on in the world; I try and make sure that our official reporting systems include incidents of antisemitism. But it is not headline news if someone with my name, "Hannah Rosenthal," condemns antisemitism; it's a yawn. But if someone who has a classically Arabic name condemns antisemitism, it has a higher impact and it sends a different message, and that message of course is: this isn't just about the Jews, this about hatred, and that effects everyone.

Do I find it hard to get others to condemn antisemitism? Well, in the United States I don't. The success and safety and security that the Jews in America have found has been because we have known how to build coalitions, and our prophetic faith had us fighting for social justice on a variety of issues. And so as we marched in the Civil Rights Movement, we also had Martin Luther King speaking out against antisemitism. And today, when there's a terrible event or terrible language being used, asking a faith leader or a civil rights leader or a human rights leader to speak out against it, is not hard in the United States. It's part of our culture here. But I have found around the world, it is not part of the culture. So for instance, the Lithuanian Jewish community is looking to pass a bill that will give some restitution to them for communal property taken by the Nazis. And they're working so hard and their numbers are so small, and I asked them, "Have you asked the cardinal if he would speak out on this bill?" It is not something they ever thought of. And I see it everywhere. So I think it's the most important export America has, and that is our best practice of fighting hatred has been linking arms with other people and working together.

There was a tolerance conference, August of 2010, that the Organization for Security and Co-operation in Europe held in Kazakhstan. The first session was to focus on Islamaphobia, the second on antisemitism, the third on Christophobia, and the fourth on everything else. And I wrote the official U.S. statement condemning antisemitism, and my colleague at the State Department Farah Pandith, who is the Special Representative to Muslim Communities around the world, wrote the official statement condemning Islamaphobia. And the night before, we swapped. And when they called on the U.S., I was the one who introduced myself as the Special Envoy to Monitor and Combat Anti-Semitism, and I condemned in the strongest terms possible Islamaphobia. And the same thing happened at the next session with Farah condemning antisemitism. Well, because we did that, signaling not just that the message was important but sometimes the messenger is important, it caused a bit of a stir and everyone who was there remembered it. And there were many young people there, and they were very excited by what we did, but they challenged us and said, "It's fine to have talking heads who are making statements, but we really need something to do." And so we decided to call for a virtual campaign and we named it 2011 Hours Against Hate. And the challenge is, how many hours will you pledge to combat hatred, how many hours will you pledge to serve or volunteer at an organization that serves people that don't look like you, they don't pray like you, they don't live like you? And it caught on like wildfire. And we've been to Azerbaijan and we've been to Turkey and we've been to Spain; we talk to people all over the world. There hasn't been a single young person that hasn't said, "Thank you, that's something I can do."

I come to my passion to fight antisemitism and all forms of hatred very naturally. My father was a Holocaust survivor and when I asked my father, "How did you live? How do you deal with the guilt of being the only survivor in your family?" He said, "Well, Hannah, I survived to have you and your sister." And so I approach the fight for equality, the fight for civil rights, the fight against all forms of hatred with a sense of urgency that I could really only get from my parents. And so it is something that keeps me going. My grown children often ask me in this job, "Isn't it terribly depressing to see day in and day out reports of it continuing?" And I say, "It's not depressing, because I get to do something about it."