Born in Transylvania just after the Holocaust, Codrescu immigrated to the United States as a teenager and eventually settled in New Orleans. Through the evolution of his now-famous surname, Codrescu reveals something about his own identity as a Jew, a poet, and an immigrant. 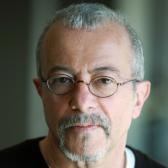 Born in Transylvania just after the Holocaust, Codrescu immigrated to the United States as a teenager and eventually settled in New Orleans. Through the evolution of his now-famous surname, Codrescu reveals something about his own identity as a Jew, a poet, and an immigrant.

ANDREI CODRESCU:
If before the war being a Jew was a crime and put us in peril, after the war during the Communist age being Jewish just was surrounded by silence.

ALEISA FISHMAN:
Andrei Codrescu is a poet, a novelist, and a commentator for National Public Radio. Born in Transylvania just after the Holocaust, Codrescu immigrated to the United States as a teenager and eventually settled in New Orleans. He taught literature at Louisiana State University for 25 years. Through the evolution of his now-famous surname, Codrescu reveals something about his own identity as a Jew, a poet, and an immigrant.

Welcome to Voices on Antisemitism, a podcast series from the United States Holocaust Memorial Museum made possible by generous support from the Oliver and Elizabeth Stanton Foundation. I'm your host, Aleisa Fishman. Every other week, we invite a guest to reflect about the many ways that antisemitism and hatred influence our world today. Here's poet and commentator Andrei Codrescu.

I grew up in a time when adults spoke very little in front of children about who they were and what they did, because they were afraid of the ubiquitous Secret Police. They were afraid to talk about serious matters, because we might take it back to school and tattle. So I really didn’t know anything about being Jewish or what that meant for quite some time. There was a silence around the idea of Jews, of Jewishness, partly because there were very few of us left in town. I think in my school there were five of us who were Jewish. We knew we had something in common, but what that was I wasn’t quite sure. There was a kind of antisemitism practiced through silence.

A good example of antisemitism…sort of covert antisemitism was the story of my name change and why it happened. I participated in a literary workshop on Wednesdays in my hometown. My original name was Andrei Perlmutter, and for some reason, which at the time I didn’t understand, the workshop wanted me to change my name to something more resounding, either more poetic or actually as I figured out, more Romanian. It was a common practice for poets in the first place. In the second, it was not possible or very hard to publish anything under a Jewish name. So we had a session to baptize me, change my name into a suitable pseudonym. And I found it myself—it was "Steiu," which is spelled S-T-E-I-U, which means a sort of rock or crag in Romanian, something very hardy. The only problem was that if you write Steiu by hand, S-T-E-I-U, the U looks a lot like an N, so it really looked like Stein. So I didn’t get very far from what I was trying to get away from or the workshop was trying to get me away from. So then I published a number of works in Romania under the name Andrei Steiu.

When I left Romania, I sent back some poems to a literary journal in Romania and I signed it out of a whim "Codrescu," which is a very Romanian name, which means "son of woods" or "wood-son," anyway something very not-Jewish. I wasn’t aware at the time that I was committing an act of unconscious antisemitism, because the name Codrescu is very close to the name Codreanu, which is almost the same name. Codreanu is the name of the founder of the Iron Guard, the famous antisemitic murderous Iron Guard of Romania. And so in a funny way, weirdly enough and unconsciously, I was naming myself after a Jew-hater.

Later, I figured it out, and so I could have changed it since I was in America, and nobody could pronounce my name anyway. But I decided to keep it, because I wanted to in the end make the name better known than the other guy. It was at that point my unconscious antisemitism became a kind of a wish for revenge, if you like. And then I got used to it. People still can’t pronounce it.