Thirty years ago, the Museum opened its doors. The survivors fervently believed it would serve as not only a lesson and a warning, but also an inspiration. Together with your support, we have accomplished so much—but we can’t be complacent. While the founders faced a daunting task, ours is no less challenging, and increasingly urgent. Just as we are losing the eyewitnesses, antisemitism is on the rise and conspiracy theories and misuse of the Holocaust are taking hold. Social media and the internet relentlessly amplify their impact.

We must respond to these challenges by ensuring the truth and relevance of the Holocaust for new generations—far beyond our walls. The survivors’ conviction about the power of memory animates a bold vision for our future. Join us on March 16 to learn more.

Register Now For more information, or to discuss sponsorship opportunities, please contact the Western Regional Office at 202.817.4725 or westernteam@ushmm.org. 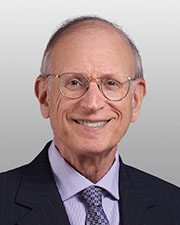 Ambassador (Ret.) Eizenstat of Washington, DC, is Chairman of the United States Holocaust Memorial Council. He previously served as a member from 2001–2004. He is a senior member of Covington & Burling LLP’s international practice. During his public service in four administrations, Ambassador Eizenstat served as Chief White House Domestic Policy Adviser to President Carter and held a number of key roles in the Clinton Administration, including Ambassador to the European Union; Under Secretary of Commerce for International Trade; Under Secretary of State for Economic, Business, and Agricultural Affairs; and Deputy Secretary of the Treasury. He served as a member of the White House staff for President Johnson.

He has made Holocaust justice and memory a major part of his career. During the Carter Administration, Ambassador Eizenstat recommended a President’s Commission on the Holocaust chaired by Elie Wiesel and helped draft the legislation authorizing creation of the United States Holocaust Memorial Museum. In the Clinton Administration, he served as Special Representative of the President and Secretary of State on Holocaust-Era Issues and, during the Obama Administration, as Special Advisor to Secretaries of State Clinton and Kerry on Holocaust-Era Issues, negotiating major recoveries from foreign corporations and governments on behalf of survivors and families of victims.

As Special Negotiator for the Jewish Claims Conference since 2009, he has negotiated additional compensation and social services for survivors, with an increasing emphasis on Holocaust memory and lessons. He is currently Special Adviser to Secretary of State Blinken on Holocaust Issues. He chairs the board of the Defiant Requiem Foundation, honoring the memory of the musicians and artists at the Theresienstadt concentration camp.

He has received eight honorary doctorates and more than 75 awards, including the Museum’s highest honor, the Elie Wiesel Award, as well as honors from the governments of France (Legion of Honor), Germany, Austria, Belgium, Israel, and the United States. 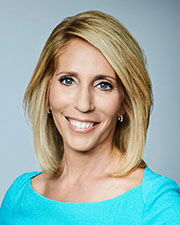 
Dana Bash is CNN's chief political correspondent and co-anchor of State of the Union with Jake Tapper and Dana Bash, the network's Sunday morning newsmaker show. Bash is based in Washington, DC, where she covers both campaigns and Congress and regularly serves as a moderator for CNN's political town hall specials. She also moderated CNN's first debate of the 2020 election cycle in Detroit, as well as the last Democratic presidential debate of the cycle, held in Washington, DC. Bash also anchored special coverage of election night in America surrounding the 2020 election, which lasted several days until CNN was the first to project Joe Biden as the winner. Bash is the winner of the National Press Foundation's 2019 Sol Taishoff Award for Excellence in Broadcast Journalism.

In 2021, Bash launched her CNN series, Being ..., which goes beyond her Sunday morning news-making interviews. The series features in-depth conversations with individuals affecting American policy, politics, and culture—giving viewers an understanding of the human being behind the public face. In 2017, Bash launched her digital CNN series, Badass Women of Washington, highlighting women from a wide range of backgrounds and generations to show how they have shattered glass ceilings on their way up the ranks.

Bash played a key role in CNN's 2016 presidential primary debates, serving as a questioner in six of the network's seven primetime primary debates on both sides of the aisle. Bash also serves as a co-anchor on set in the CNN Election Center for all election night specials. As part of her coverage of the 2016 presidential campaigns, Bash conducted sit-down interviews with a majority of the candidates including Donald Trump, Senators Ted Cruz, Marco Rubio, and Bernie Sanders, and Governors Jeb Bush and John Kasich.

Bash also continues to be instrumental to the network's Capitol Hill coverage. In 2015, she broke news on live television that House Majority Leader Kevin McCarthy would not be running for Speaker of the House and also conducted Speaker John Boehner's final interview on his last day in office. Bash also served as the lead correspondent covering former Secretary of State Hillary Clinton's 11-hour testimony before the House Select Committee on Benghazi. She played a key role in the network's midterm Election Night in America coverage, providing reports from the war rooms of the RNC, the DNC, and CNN's Election Center in Washington. Bash has secured several key interviews with lawmakers, including a television exclusive with Sen. Rob Portman (R-Ohio) to talk about his gay marriage reversal, the groundbreaking interview with former Rep. Gabrielle Giffords (R-Ariz.) and her husband, Mark Kelly, in Arizona, and the first interviews with Sen. Rand Paul (R-Ky.) and Sen. Ted Cruz (R-Texas) after each member's Senate filibuster. 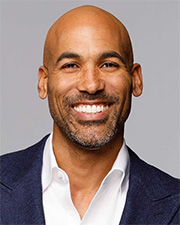 Melvin Robert, an Emmy Award–winning journalist who has also received a Golden Mike award and an award from the Los Angeles Press Club, joined Extra as a senior correspondent and weekend co-host in 2022.

Robert was previously with Spectrum News 1 SoCal as a member of their original talent team, launching the network and introducing audiences to their unique brand of hyperlocal news. He served as co-anchor of Your Morning on Spectrum News 1 and host of The SoCal Scene. Known for his infectious energy, authenticity, and relatability, he is committed to expanding the consciousness of the human collective through the craft of storytelling. Robert’s work uplifts, inspires, and educates through his unique ability to connect with interview subjects and viewers.

While with Spectrum News 1, he covered some of the biggest local and national news stories, including the inauguration of President Joe Biden, the ongoing COVID-19 pandemic, and the 2020 civil unrest following the murder of George Floyd. Additionally, he covered the 2019 Los Angeles teachers’ strike, Saugus High School shooting in the Santa Clarita community, and the Ridgecrest earthquake. He also reported on the deaths of Rep. John Lewis, George H. W. Bush, Kobe and Gianna Bryant, and Nipsey Hussle. In 2022, he was awarded Broadcast Journalist of the Year at the 14th annual National Arts & Entertainment Awards, presented by the Los Angeles Press Club.

A Southern California native, Robert was born and raised in Inglewood. He is a graduate of Loyola High School of Los Angeles, and matriculated to Loyola Marymount University, where he earned his BA in English and MA in Educational Studies focused in human development and counseling.

Prior to his career in television, he spent 11 years as a teacher, counselor, administrator, and consultant, serving a broad array of educational needs. Robert’s career in education led him to serve the needs of diverse populations, from at-risk and severely emotionally and psychologically challenged students to those learning the English language, minority college students, and adults within the corporate sector.

A lover of people, song, dance, and the arts, he believes that life is more fulfilling when we choose to be happy and let that which we are most passionate about be our compass. 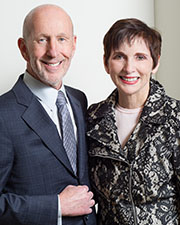 Amy and Morton Friedkin have held several leadership roles on behalf of the United States Holocaust Memorial Museum. Amy was a member of the United States Holocaust Memorial Council, appointed by President Barack Obama. Morton served on the initial steering committee for the Museum, representing the San Francisco Bay Area. They are members of Museum donor recognition societies, the Founders Society and the Legacy of Light Founders Society, and led an endowment challenge grant effort for the Museum.

Amy and Mort, natives of the Bay Area, have been active in the Jewish community locally and nationally. They have each served as president of the Jewish Federation of the Greater East Bay.

Amy was the first female president of the American Israel Public Affairs Committee (AIPAC), from 2002 through 2004, and then served as the national chair of AIPAC. She currently serves on the Endowment Committee of the Jewish Community Federation and Endowment Fund and is president of ISRAEL21c.

Morton is the chairman of Friedkin Property Group, specializing in real estate investment and development. He previously served as the national vice chair and regional chair of United Jewish Appeal and was a long-time board member of the American Jewish Joint Distribution Committee, or JDC. 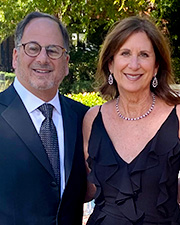 Jean and Sandy Colen are actively engaged in many aspects of Jewish life in Northern California, including leadership roles in Hillel International, the Magnes Museum Foundation, and previously with the Jewish Community Federation. Their philanthropy spans nearly four decades of involvement with Jewish organizations locally, nationally, and in Israel. They have two adult children living in Southern California. 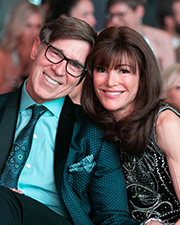 Katie Rodan is co-creator and founder of Rodan & Fields, a multinational skin care company and co-creator of Proactiv Solutions. Katie also has a private dermatology practice in Oakland, California, and is clinical associate professor of dermatology at Stanford University.

Amnon Rodan is chairman emeritus of Rodan & Fields. Dedicated to increasing national service opportunities in the United States, he serves on the national boards of buildOn and Service Year Alliance. He is also co-president of the Aspen Art Museum.

Katie and Amnon are the founders and directors of the Rodan Family Foundation, principally dedicated to finding a “cure” for OCD and building a vibrant Jewish community in the San Francisco East Bay. The foundation supports AIPAC, the Washington Institute, the Reut Group, Enter, Hillel, Moishe House, Jews of Color, and many more.

Katie and Amnon have two children and two grandchildren.

More
Register For This Event For more information, or to discuss sponsorship opportunities, please contact the Western Regional Office at 202.817.4725 or westernteam@ushmm.org.

Please contact the Western Regional Office at 202.817.4725 or westernteam@ushmm.org.

Thank You to Our National Partners and Donors