Iraq: From Cradle to Grave of Civilizations Previous 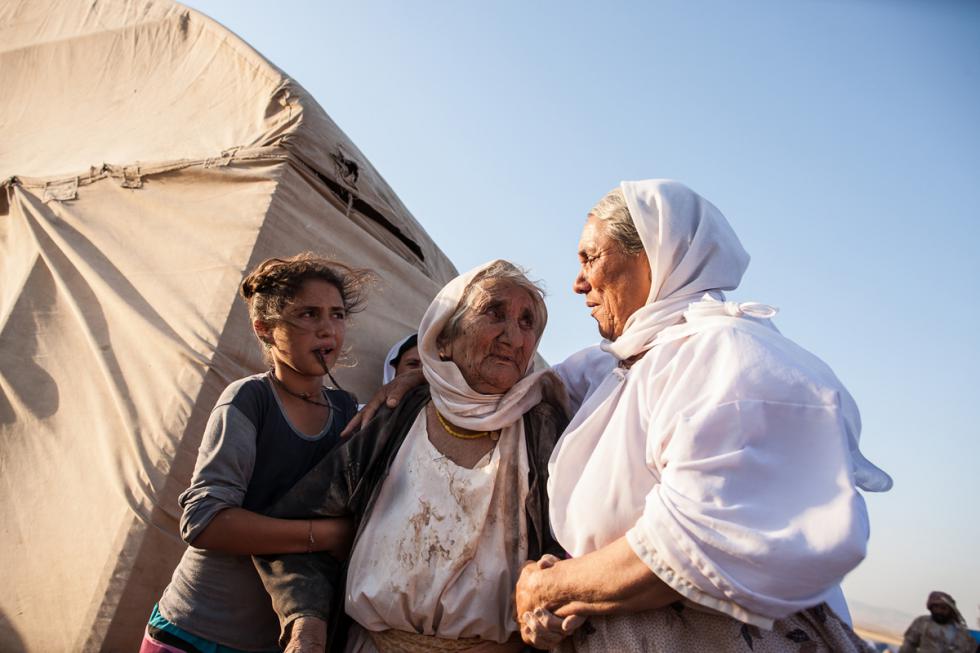 Loved ones help an elderly woman walk to the tent in Newroz refugee camp in Syria where she and her family stayed after escaping from Mount Sinjar in 2014. —Mackenzie Knowles-Coursin, US Holocaust Memorial Museum

The self-proclaimed Islamic State (IS) continues to present a serious threat to civilians. Members of minority groups who were kidnapped and remain under IS control continue to be the victims of mass atrocities. Those who are displaced cannot return to their homes in Ninewa unless their land is liberated, and even then not until they are guaranteed physical protection.

The Challenge of Responding to IS

Despite the name it has given itself, the self-proclaimed Islamic State (IS) does not behave like a state. It does not respect international borders and instead moves freely between Syria and Iraq. It repeatedly violates international law, including international human rights and humanitarian law.

IS has been able to perpetrate mass atrocities with impunity. As a non-state actor, it is not a signatory to the International Criminal Court. The only way that perpetrators will be held accountable is if the United Nations Security Council refers the situation in Iraq to the court or if states—Iraq or third parties exercising universal jurisdiction—prosecute individual fighters. Thus far, there appears to be little political will to do this.

US military forces withdrew from Iraq in December 2011. But as the self-proclaimed Islamic State (IS) conquered territory in northern Iraq, the United States announced a limited military reaction to the conflict. As IS conquered Yezidi villages during the summer of 2014, many Yezidis sought refuge on Mount Sinjar, thinking they would be safe on high ground. But IS encircled the mountain, leaving the Yezidis to descend as victims or to starve to death. On August 7, 2014, US President Barack Obama announced that the United States would act to prevent genocide on the mountain. Air strikes followed in support of the Kurdish Peshmerga and Iraqi Army, which opened up a route to escape from the mountain.

This was a rare moment for the US government’s stance on mass atrocity issues: an explicit recognition that potential future atrocities led to a shift in US policy. But Obama’s statement also referenced the US government’s interest in halting potential IS attacks against a large community of Americans in Erbil, 130 miles to the east, suggesting multiple motivations for the air strikes. On August 13, US officials went to Mount Sinjar to assess threats facing Yezidis still trapped there. Later that day, Pentagon officials announced that the United States had misjudged the gravity of the Sinjar crisis and that US officials no longer planned to evacuate civilians atop the mountain.

Some people we interviewed in Iraq expressed frustration with the US assessment and subsequent scaling down of protection efforts, as well as with the narrow geographic focus on Mount Sinjar. They said that the assessment failed to look at threats facing Yezidis who were being attacked at the base of the mountain or in besieged communities, especially on the south side of the mountain. Yet without the combined action of Kurdish, Yezidi, and US-led international forces, tens of thousands more may have been killed.

For many of those who fled Ninewa, the advance of IS forced them into poverty, reliant on humanitarian assistance to survive. The Kurdistan Regional Government, which opened its doors to those escaping, fell under considerable strain in caring for the displaced. In one year, the population of Iraqi Kurdistan increased by approximately 28 percent at a moment when its economy had been suffering.

Many Kurds who we spoke to said that they welcomed the displaced, saying that as a people that also had been displaced they had an obligation to help. Yet resources were scarce. Only 40 percent of the projected funding needed for humanitarian assistance, including medical assistance, food aid, and psychosocial support, had been donated.

Prolonged displacement threatens the preservation of these communities’ religious and cultural identity. This is especially true for non-Kurdish-speaking communities, including the Christians, Kaka’i, Shabak, and Turkmen.

Given ongoing risks and the inability of many to return home, foreign governments should commit to increasing the number of refugees from Iraq they accept and expedite the refugee determination process.

The culture of impunity that has prevailed in Iraq for decades is a key driver of violent conflict and mass atrocities today. The general lack of and mismanagement of investigations, prosecutions, and accountability for perpetrators send a strong signal to those considering taking up arms, whether in support of or against IS, that there are no costs to committing atrocities against minority communities. The Iraqi government’s limited capacity and lack of political will surrounding accountability issues also create significant barriers to the pursuit of justice.

Our report (PDF) outlines the Simon-Skjodt Center’s belief that IS perpetrated genocide against the Yezidi. Any formal determination of whether genocide was perpetrated needs to be made by a court based on careful consideration of the evidence. Though several years have passed since the crimes were perpetrated, there has been little investment in the investigation, documentation, or preservation of evidence that could be used to make such a legal determination. The Kurdistan Regional Government has established a committee on genocide and committee on mass graves to begin the process of documentation, but they are under-resourced and lack sufficient technical expertise.

There needs to be an immediate investment in transitional justice that addresses both current and past mass atrocities committed in Iraq. This includes documenting crimes perpetrated by IS and affiliated groups, as well as those committed during counter-IS efforts, for the purposes of understanding the full scope of atrocities in Iraq and future prosecutions of perpetrators.

What unfolded in northern Iraq was the widespread and systematic targeting of particular groups on the basis of their identity, with devastating consequences. The severity and scale of those crimes should compel global action. The Iraqi government and international community have affirmed that they must protect populations not only from genocide, but from crimes against humanity, war crimes, and ethnic cleansing. To this end, the United States government has specifically stated that preventing mass atrocities—all atrocities, not just genocide—is a core national security priority.

Despite these policy priorities, there are significant ongoing threats to civilians in Iraq. There are concerns about Shia militias aligned with the Iraqi government, as well as a potential resurgence of IS, that leave minority communities in Iraq vulnerable to future attack. Those who have fled have not seen the security or political stability necessary for them to return home. The United States and other countries combatting IS and striving to prevent future atrocities should articulate, as part of their broader strategies, efforts and tools that they can employ to address and minimize ongoing threats to civilians.

Iraq: From Cradle to Grave of Civilizations Previous