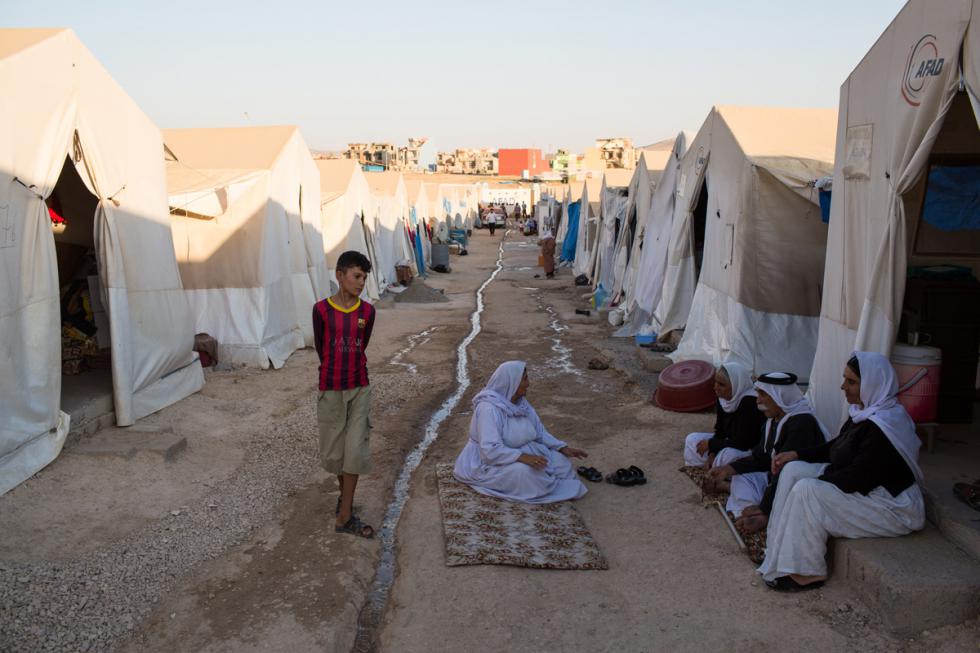 Residents talk outside their tents at a displaced persons camp in Dohuk, Iraq. —Mackenzie Knowles-Coursin for the US Holocaust Memorial Museum

Mosul—which had 1.8 million residents a decade ago and more than a million residents before the self-proclaimed Islamic State (IS) captured it in mid-2014—had fewer than 500,000 residents after IS occupation. Smaller towns stand empty, their residents driven away by the terror of IS.

When IS attacked Mosul in June 2014, more than 500,000 Iraqis of all backgrounds fled (external link), pouring into surrounding areas. Hundreds of thousands more left their homes as the IS siege spread methodically across the region from town to town. IS very quickly started preying on the local population and targeting minorities.

People had hoped that Iraqi security forces and the Iraqi Kurdish Peshmerga would intervene to protect them from IS. But they realized that there was no protection—many of the government troops retreated without warning local residents. That retreat forced people to flee on very short notice as the Islamic State’s mortars and fighters advanced on their towns. As one Yezidi survivor said, “If only they [the Peshmerga] told us they were leaving, we would have fled earlier, and lives would have been saved.”

Without sufficient warning, many people fled their homes with little more than the clothes they were wearing that day. “In the end, we just left everything behind,” a woman said, echoing many others. Some took little with them out of haste; others believed that they would be able to return home in a matter of days or weeks.

“I thought I would be home in two days, so I only took my ID,” said a Christian man from Mosul. When we spoke to him in 2015, he had been living in Iraqi Kurdistan for more than a year and could not return home. In some cases, even what little those who fled could carry with them was taken away, as IS fighters at checkpoints seized gold, jewelry, money, and phones. Many people were left destitute.

And then there were those who were left behind. Many, if not most, who left their homes tell heartbreaking stories of decisions to leave elderly or ill family members who were physically incapable of fleeing or friends who had no means to get out. This situation was especially true for the poor and for individuals who had no access to cars or trucks and thus had to flee on foot.

The whereabouts of those left behind is still unknown—in many cases, they may have been kidnapped or killed by IS. One man’s elderly cousin and his wife were left behind and died, apparently of starvation. Others perished in the act of escape, like the man we heard about who drowned trying to cross a river or those who were killed by IS forces as they took flight.

Many sought refuge in the Ninewa plains or on Mount Sinjar, only to be displaced again when IS moved forward or become trapped on the mountain until Syrian Kurdish forces, backed by US airstrikes, opened an evacuation route. Until they landed in displaced-persons camps run by international aid organizations, or they found new homes or refuge with friends or family in safe territory, minorities from Ninewa province were on the run.