Key Findings Previous A Crisis in Plain Sight Next 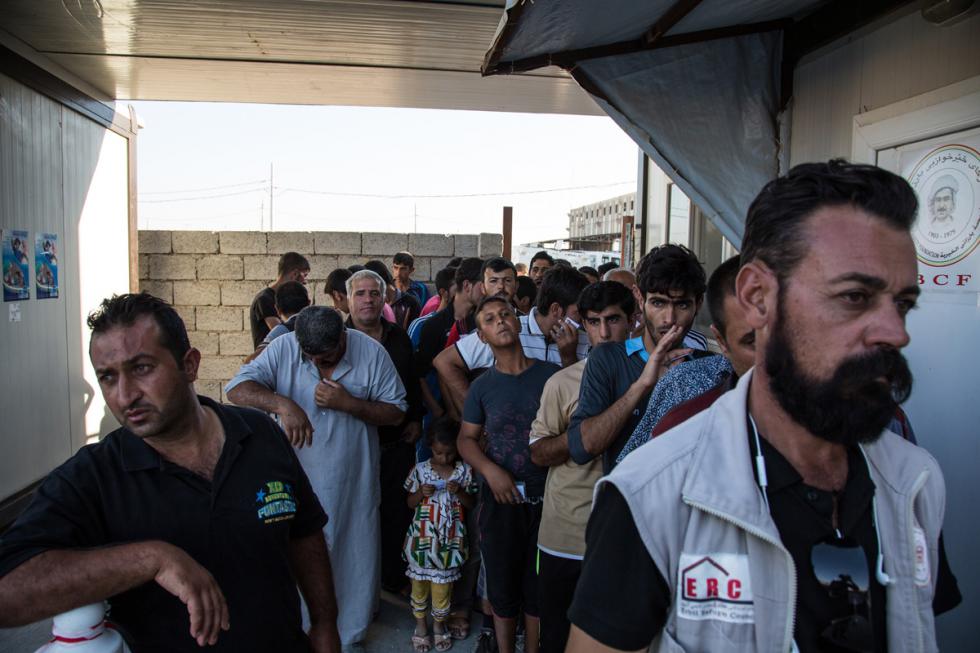 Displaced Iraqis queue up to get food at a camp in Erbil. —Mackenzie Knowles-Coursin for the US Holocaust Memorial Museum

Even those living in northern Iraq who had not yet experienced the violence of the self-proclaimed Islamic State (IS) felt its fury. Everyone had heard the horrible stories of what happened after an IS invasion: people ordered to convert, forced from their homes, their businesses taken from them, family members kidnapped—and worse.

IS propaganda and rumors of the group’s violence left local residents uncertain of what was to come. Rumors that IS was approaching encouraged people to flee.

There was always hope that IS would be forestalled—that Iraqi or Kurdish security forces or international troops would step in to halt IS’s march across the region. But help came too late.

According to the United Nations (PDF), the Islamic State has a “deliberate and systematic policy that aims to suppress, permanently cleanse or expel, or in some instances, destroy those communities within areas of its control.”

IS has justified its atrocities as part of its extremist religious ideology. It used fear and barbarism to force civilians from population centers, to maintain order in territory it controlled, to enslave women, and to generate new recruits. As word of IS atrocities in Syria spread through northern Iraq and then came closer to home, the level of fear ratcheted higher.

In August 2014, IS moved methodically from town to town, driving residents away and looting what was left behind. If a town’s residents heard that a large nearby city had fallen to IS, their fear was compounded—would their town be next? Could they get their family out safely? What had happened to those with whom they’d lost touch?

Taking advantage of traditional and social media, IS sowed fear. It boasted of its triumphs in Syria and in larger Iraqi cities such as Mosul. Fear bred uncertainty. What would happen next? What had happened—or would happen—to friends and family members? Would there be a chance to get out in time? Would there be any chance of coming back?

As the fear grew, people packed up their families and belongings and left—if they had time. If they heard the IS mortars reach the edge of town, or IS fighters entering the village, it might be too late.

Key Findings Previous A Crisis in Plain Sight Next