Cultivating Fear Previous So Near, So Far Next 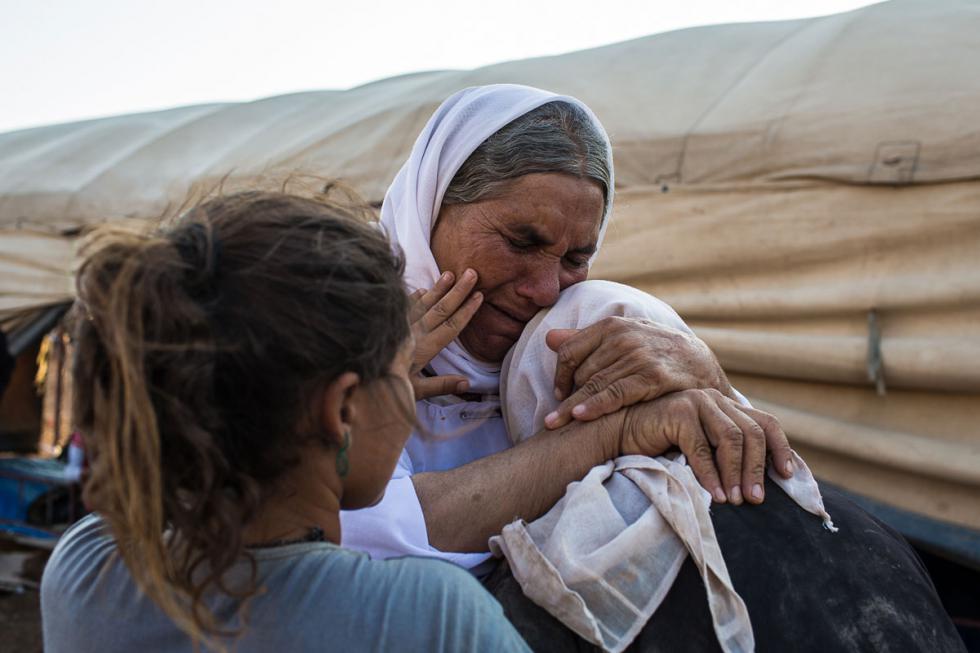 A relative embraces an elderly woman as she walks the final stretch into Newroz refugee camp in Syria in 2014. —Mackenzie Knowles-Coursin, US Holocaust Memorial Museum

The self-proclaimed Islamic State (IS) has not concealed its violent hatred of other religious groups—rather, it has broadcast its extremist ideology far and wide. Many of its victims were targeted because they belonged to ethnic or religious minorities.

The most effective way to prevent genocide is to identify and act upon early warning signs. Those include the existence of potential perpetrators—a person or group with the motives and capacity to commit mass atrocities. In this case, IS left no doubt about its intentions. It even used violent acts as a tool for recruiting more fighters.

Not only were the Christian, Shia, Yezidi, Turkmen, and Shabak communities lesser beings according to IS’s extremist ideology, but they have been victims of prior violence and human rights violations—another early warning sign. More than 70 years ago, Iraq began a process of “Arabization” that changed the composition of Ninewa’s population. In the 1980s, the government of Saddam Hussein used chemical weapons, ground offensives, mass deportation, and the destruction of villages to kill or displace more than one million people, primarily Kurds.

The defeat of Hussein’s government by US and coalition forces in Fall 2003 led to a nearly complete security vacuum and rising religious extremism. Over the past decade, the United Nations, the US government, international nongovernmental organizations, and Iraqi religious communities have warned about the dire threats facing ethnic and religious minorities. Egregious attacks against minority communities perpetrated by Sunni extremist groups, including early iterations of IS, met with few repercussions.

In the Ninewa governorate in northern Iraq, high numbers of potential victims and potential perpetrators lived in close proximity. Three million people lived in Ninewa, the area falling along the border of Iraq and the Iraqi Kurdistan Region, before June 2014. Though predominantly Sunni, 10 percent of the population (external link) belonged to minority groups, making it Iraq’s most diverse area.

Taken together, the history of persecution, the absence of a stable government, and the rise of a motivated perpetrator mean the recent mass atrocities in Ninewa should have been no surprise to those who could have prevented them.

Cultivating Fear Previous So Near, So Far Next