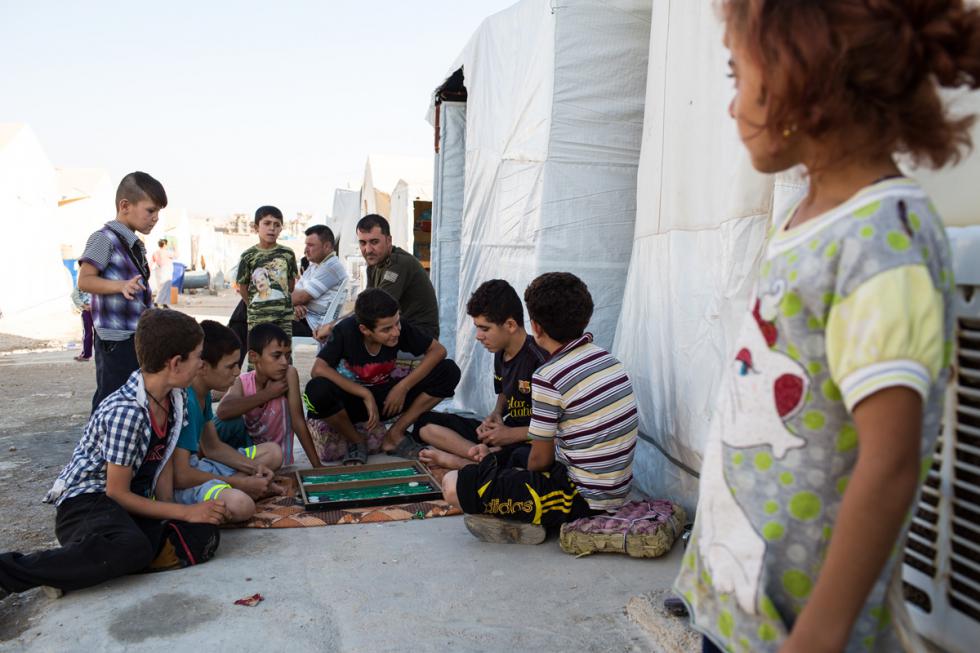 A young Yezidi girl looks on as group of boys play a board game in a displaced persons camp. —Mackenzie Knowles-Coursin for the US Holocaust Memorial Museum

How do you rebuild your life when you’ve been uprooted and forced from your home, from a town where your family may have lived for centuries?

Driven out by the self-proclaimed Islamic State (IS), hundreds of thousands of people who lived in northern Iraq have scattered, generally to Kurdistan. Those people who weren’t killed or kidnapped by IS fled elsewhere or, in some cases, lived in displaced-person camps. Many of the displaced Iraqis were not reunited with family members and friends until they reached the camps or other safe places; many more still wonder what happened to the missing, and they fear the worst.

Children in particular suffered during the crisis, often losing months or years of schooling at critical ages because of instability and lack of resources. The elderly and handicapped are similarly hard hit.

Most of the displaced Iraqis lived in poverty after fleeing IS, but that was not their previous life. Many of them were quite well off, or at least middle class—farmers, shopkeepers, professionals. Forced to flee with what they could carry—and often having valuables confiscated by IS along the way—they’re now adjusting to significantly reduced living standards, sometimes crowded several people to a room. “Now we live with no dignity,” one Christian man said.

Some displaced people moved in with friends or relatives elsewhere or had enough money to rent apartments in safe areas. But many of the displaced were forced to stay in unfinished buildings without water or electricity. And others—about 10 percent of the total—were living in displaced-person camps—crude encampments that often are little more than collections of tents and container boxes, or “caravans,” as the residents call them.

The camps, generally overseen by international and Kurdish aid agencies or religious groups, ran on shoestring budgets. The huge influx of displaced persons strained the aid system. Today the majority of these communities remain displaced. Many within the Yezidi community are still living in tents and containers five years after they first fled.