The Islamic State: A Growing and Powerful Threat Previous Iraq: From Cradle to Grave of Civilizations Next 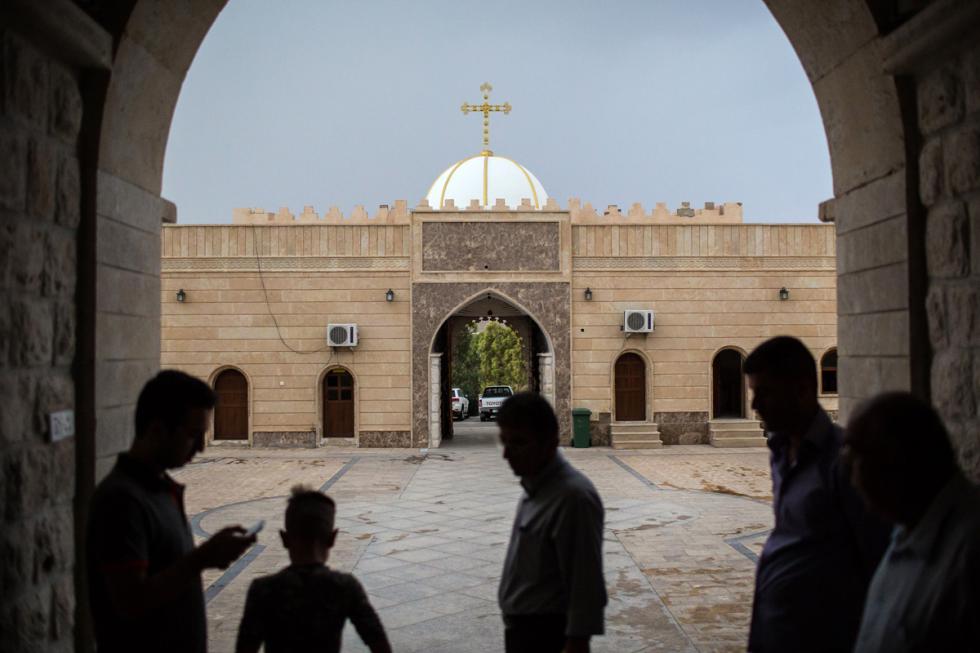 Christian men stand and talk in the entrance of a church in Alqosh. —Mackenzie Knowles-Coursin for the US Holocaust Memorial Museum

The actions of the self-proclaimed Islamic State (IS) against the various religious and ethnic minorities of northern Iraq is guided in part by its warped interpretation of what Islam teaches about ahl al-kitab, or the so-called people of the book (external link). In Islam, Muslims, Jews, and Christians are considered ahl al-kitab because these religions recognize the God of Abraham, or Yahweh, as the one and only God. In theory, people of the book would be able to live inside IS’s so-called caliphate under persecutory conditions. Other religious groups, which today form minority sects in Iraq—such as Yezidis, Shabaks, or Sabaean-Mandaeans—are regarded as infidels and subjected to various forms of brutality on this basis. IS has built upon long-existing prejudices against many of the ethno-religious minorities—particularly the Yezidis whose religious beliefs have been misunderstood for centuries and who are routinely even today referred to devil worshippers. Even some Muslims, notably Shia Muslims, have been targeted because in the IS interpretation, they are seen as infidels and apostates.

This distinction leads to differentiation in the treatment of minority groups by IS. Christian survivors we spoke with in northern Iraq suggested that, as “people of the book,” they were offered three alternatives to death at the hands of IS fighters: pay a tax known as jizya, flee, or convert. On the other hand, IS views the Yezidi community as polytheists, which they consider to be a grave offense; and Shia Shabak and Shia Turkmen, whose Shia Islamic practice IS sees as apostate, were also subjected to horrific mass atrocities, including killings.

The Yezidis are an ethnoreligious minority dating back more than 4,000 years. Currently, an estimated 500,000 Yezidis live in Iraq (external link), predominantly in the northern province of Ninewa.

Yezidis believe in one God whose power on Earth is delegated to seven angels. The angels are led by the Peacock Angel, Malek Taūs, the intermediary between God and the Yezidis. Malek Taūs is understood to have been an angel who fell to earth and transformed into a peacock. Another key symbol of Yezidism is that of the serpent, who Yezidis believe helped humanity to survive the Flood when it used its body to seal a leak in Noah’s Ark.

The Yezidis' veneration of a fallen angel and a serpent is highly controversial in the three Abrahamic faiths because both are associated with the story of Lucifer. This has given the Yezidis an undeserved reputation for being "devil-worshippers." The enduring misreading of the Yezidis' faith and the consequent othering of this religious community have led to deeply-ingrained prejudices in Iraqi society, long predating the rise of the terrorist groups in Iraq.

Yezidis have frequently been pressured to assimilate to both Arab and Kurdish ethnicities. IS has been particularly malevolent toward Yezidis, perpetrating mass killings, kidnappings, and, according to the Museum's report, genocide.

In 2007, extremists carried out four truck bombings that killed 300 Yezidis, wounded 700, and destroyed 400 homes. In August 2009, two suicide bombers attacked a cafe in Sinjar City, killing 21 people and wounding 32. In October 2013, Yezidi students at Mosul University received anonymous warnings to leave the university or be killed. Nearly 1,000 students left their studies as a result.

In August 2014, IS launched a violent campaign against Yezidis in northern Iraq, summarily executing thousands of them and abducting and enslaving scores of Yezidi women and girls. While thousands of Yezidis fled into the Kurdistan region of Iraq, some 50,000 Yezidis fled to Mount Sinjar, where they became trapped without food or water. The Islamic State laid siege until US airstrikes and Syrian Kurdish Peshmerga fighters finally opened up an evacuation route.

Over the course of the IS campaign, Yezidi human rights advocates reported, 1,562 Yezidi were killed, including those believed to have died on Mount Sinjar from starvation, dehydration, and injuries after it was besieged by IS. Kurdistan Regional Government officials reported that IS kidnapped 5,838 Yezidis, of whom 3,192 were female and 2,646 were male. By August 15, 2015, officials reported, 2,080 Yezidis had been liberated, including 302 men, 510 boys, 785 women, and 483 girls. Almost all of the boys who were released had been forced to convert to Islam. According to Yezidi advocates and international news outlets, approximately 3,000 Yezidis remain missing. It is unclear how many of them are alive and are being held by IS and how many have been killed.

Although Christianity has its origins in the Middle East, Christians today make up less than 5 percent of the region’s population. In Iraq, they constitute less than one percent of the population but are the largest non-Muslim minority in the country. Many Christians have fled the country in recent years. In 2003 there were 1.5 million Christians in Iraq (external link); that number had been more than halved by 2008, and is less than half again that today.

In January 2008 in Iraq, 10 churches and convents were the target of reported bomb attacks. In October 2008, the assassination of 14 Christians in Mosul led to the exodus of 12,000 Christians from the city. In October 2010, a siege on a church in Baghdad killed more than 50 Christians. In 2012, an extremist group in Mosul issued an ultimatum to Christians in the city to leave or be killed. In 2013, bombs timed to explode as worshippers left churches in Baghdad killed 35 people.

Christians have faced persecution in Ninewa province for decades and especially since the fall of Saddam Hussein in 2003. With the advance of IS in Ninewa, more than 125,000 of the 310,000 Christians were forced to flee from their homes, many from Mosul and Qaraqosh. IS presented Christians from Mosul with a devastating choice: pay a tax, convert, leave, or die.

The Shabak are an ethnic minority that has lived in the region since the 16th century. Between 250,000 and 400,000 Shabaks currently reside in Iraq (external link), mostly in the north. Though they have ethnic ties to the Kurds, Turks, and Persians, they stress their own ethnic identity. The majority identify as Shia, but some are Sunni. The Shabak belief system combines aspects of Sufi Islam and Christianity, a difference that has led to their marginalization and oppression.

Since 2004, a reported 750 Shabak have been killed in targeted attacks. In October 2007, flyers distributed in Mosul from a group allied with Al Qaeda in Iraq called the Shabak “rejecters” of Islam and said there was “an obligation to kill them and to displace them with no mercy.” In August 2009, two flatbed trucks exploded in the Shabak village of al Khazna, killing 35 people, wounding 200, and destroying 65 homes. In 2013, 56 Shabak were killed in 15 attacks during a period of six months.

IS considers the Shabak to be followers of Shia Islam and therefore apostates and non-Muslims, and has targeted them with violence, kidnapping, and forced displacement. 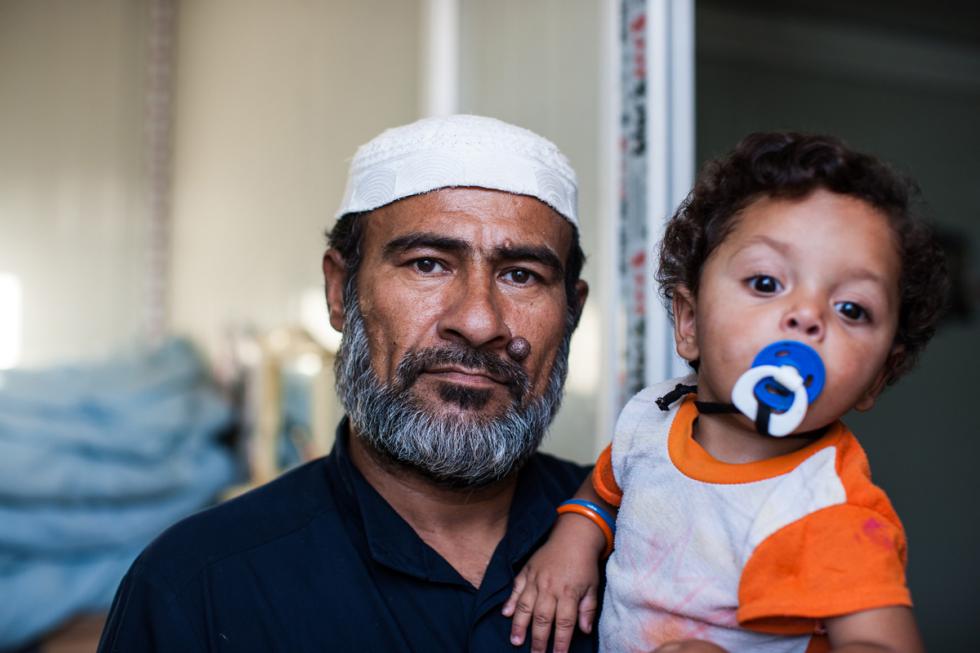 A Sunni man from Mosul, holds his child in the container in which they now live in a displaced-persons camp on the outskirts of Erbil. —Mackenzie Knowles-Coursin for the US Holocaust Memorial Museum

An ethnic minority in Iraq whose history in the region dates to the 15th century, Turkmen reside primarily in the northern and central provinces of Mosul, Kirkuk, Salaheddin, and Diyala. They are considered the third-largest ethnic group in the country, with population estimates ranging from 500,000 to 2.5 million (external link). The majority of Turkmen are Sunni Muslim, and about 30 percent identify as Shia. A small number identify as Christian.

Turkmen have faced decades of persecution and pressure to assimilate to both Arab and Kurdish populations. Under Saddam Hussein’s “Arabization” policies, they were forcibly displaced from their homes, discriminated against in the workplace, and encouraged to formally change their ethnic identity. They have been frequent targets of the Islamic State’s violent campaigns.

A community that is united by ethnicity but divided by religion, the Shia Turkmen community came under sustained attack in the post-2003 insurgency. Twenty Turkmen students were killed in June 2006, and in July of that year a suicide bomber killed 28 Turkmen outside a cafe near Kirkuk. Between 2003 and 2006, a reported 1,350 Turkmen were killed and 3,658 houses were destroyed in the area of Tal Afar. In July 2009, suicide bombers killed 45 Turkmen and wounded 65. In August 2009, a truck bomb exploded outside a funeral, killing at least 37 people. In 2012, according to reports, 46 Turkmen were assassinated, 12 were kidnapped, 329 were injured, and 61 died in explosions, including at mosques.

Shia Turkmen have been frequent targets of violent IS campaigns, with consistent reports of killings and sexual violence. Shia Husseiniyas in Turkmen areas were methodically destroyed by IS. 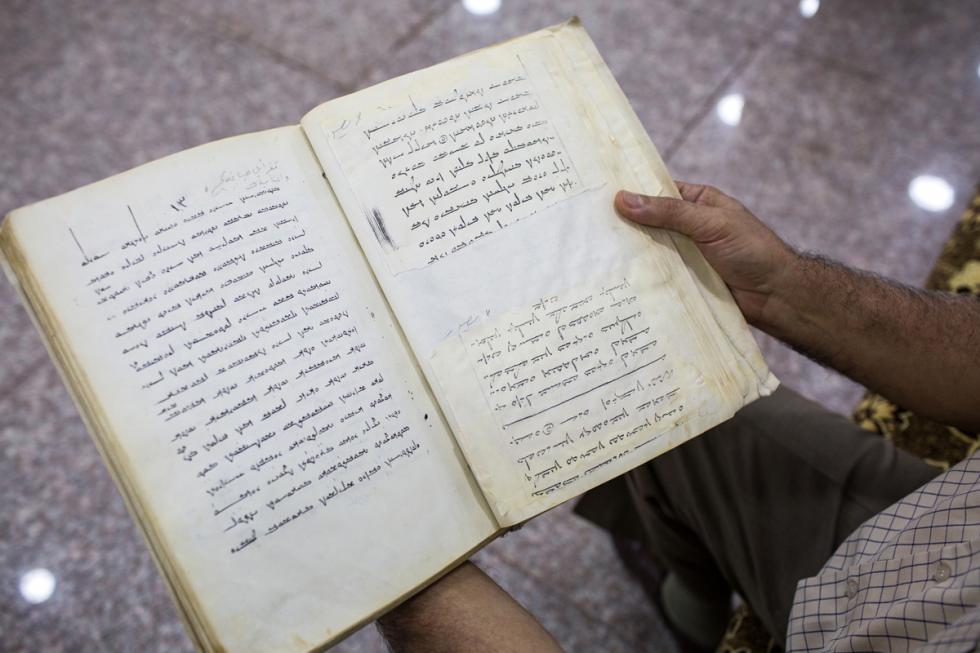 The Ginza Rabba, the holy book of the Sabaean-Mandaeans. —Mackenzie Knowles-Coursin for the US Holocaust Memorial Museum

The Sabaean-Mandaeans are a religious minority with a distinct monotheistic belief system that predates Christianity, Judaism, and Islam and centers on the prophetic figure of John the Baptist. As a result, they are not considered “people of the book” by IS.

They are a very closed society—marriages outside the community are prohibited. In the early 2000s, the Sabaean-Mandaean population in Iraq was estimated at approximately 50,000; today estimates range from 3,500 to 5,000 (external link). In many ways, they are a minority among minorities.

Persecution and assimilation policies have routinely threatened their religion and culture for centuries. The Mandaic language—a variation of Aramaic—has been deemed “critically endangered” by UNESCO, the United Nations Educational, Scientific, and Cultural Organization.

Originally centered in Baghdad, the Sabaean-Mandaeans have been targeted by extremists during the post-2003 insurgency. Many community members sought refuge in Iraqi Kurdistan and outside Iraq in recent years and are largely marginalized in Iraq.

Sabaean-Mandaeans who we spoke with in Iraq suggest that participation in gold trading, their pacifist ideals, and their ritual dress have made them common targets for violence and looting. The rise of IS in the region has exacerbated the situation for the remaining Sabaean-Mandaeans, as they have been frequent targets of the group's violent campaigns.

An ethnoreligious minority, some 200,000 Kaka’i live in Iraq’s northern provinces (external link) of Kirkuk, Mosul, and Diyala. Although they are often viewed as ethnic Kurds, they have a distinct culture, language, and religion. Their religion, called Yarsanism, has origins in 14th-century Iran and combines aspects of Zoroastrianism and Shia Islam.

Because of their perceived ethnic affiliation with the Kurds, many Kaka’i faced persecution and pressure to assimilate under Saddam Hussein’s “Arabization” policies. Like other Iraqi minorities from non-Abrahamic faiths, the Kaka’i community were frequently targeted by IS.

The Islamic State: A Growing and Powerful Threat Previous Iraq: From Cradle to Grave of Civilizations Next