Early Efforts Previous The Cases Next

With Sihanouk restored to the throne and the Vietnamese-installed government out of power, US relations with Cambodia began to improve in the 1990s. US aid resumed, and in 1994 President Clinton signed the Cambodian Genocide Justice Act. Under this law, the main perpetrators of the crimes of the Khmer Rouge were to be brought to trial. The United States provided $500,000 for research and collection of information about the crimes.

As the 1990s progressed, the Khmer Rouge crumbled as a political movement in the dwindling areas of the country they still controlled. In 1997, the Cambodian government requested help from the United Nations in prosecuting former leaders.

Pressure to arrest Pol Pot, who remained at large, mounted. One Khmer Rouge faction declared it had conducted its own trial and sentenced him to life imprisonment. But before Pol Pot could be brought to justice before an internationally recognized court, he died, apparently of natural causes, in April 1998. The last remnants of the Khmer Rouge movement disbanded the following year.

In the 1990s, the United Nations had set up independent tribunals to prosecute crimes committed in the former Yugoslavia and Rwanda, with each court operating outside the country in which the offenses occurred. For Cambodia, the United Nations initially proposed creating a third such court. But the Cambodian government under Prime Minister Hun Sen insisted that any court be placed inside Cambodia. Among other effects, this would help give his government an important role in its operation. 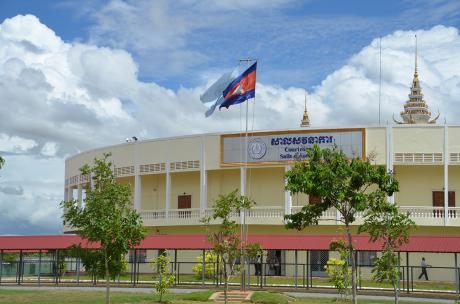 The ECCC building is located on the outskirts of Phnom Penh. —ECCC

The compromise that eventually emerged was a domestic Cambodian court that would operate with  significant international cooperation. In 2001, the Cambodian government passed a law to bring the Extraordinary Chambers in the Courts of Cambodia (ECCC) into being.

After years of negotiations, the United Nations and Cambodia signed a final agreement in June 2003 to create the tribunal. It would apply both international and Cambodian law (which itself is based on the French legal tradition). The hybrid court’s functions—investigation, prosecution, and judgment—would be carried out by both Cambodian and foreigners, along parallel tracks.

The court’s official mandate is to bring to trial “senior leaders of Democratic Kampuchea and those who were most responsible for the crimes and serious violations of Cambodian laws related to crimes, international humanitarian law and custom, and international conventions recognized by Cambodia, that were committed during the period from 17 April 1975 to 6 January 1979.”

Early Efforts Previous The Cases Next