Justice beyond the Courts Previous

The question of whether true and comprehensive justice will be served in these trials remains open. The most obvious question—is it ever too late for justice?—has been answered in the affirmative with the deaths of a number of former Khmer Rouge leaders. Pol Pot, the movement’s supreme leader and arguably the most culpable for the nearly four years of horrors, died before being brought before the international body. Ieng Sary, the former foreign minister, died during his trial. 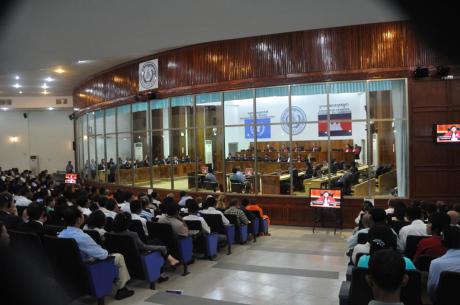 Some Cambodians fault the court for its limited scope. As of December 2018, only three defendants have been convicted, two defendants died during their trials, and one ongoing case was dismissed. Three further defendants have been formally charged, and their cases are under investigation. Meanwhile, former mid- and low-level Khmer Rouge members live openly in communities across the country. Some Cambodians must endure street-side encounters with men and women who were once their tormentors. Moreover, former Khmer Rouge figures hold high positions in today’s elected government.

Some analysts feel the Cambodian government opposes more prosecutions due in part to fear that crimes by senior figures within its ranks would be brought to light. Indeed, the tension between Cambodian and international parties to the court has become increasingly pronounced due to the Cambodian government’s reluctance to issue further indictments.

The August 2014 conviction of Khieu Samphan and Nuon Chea drew mixed reactions from Cambodians. “I feel so happy that I can witness the verdict today,” said Suor Sotheavy. “I seem to forget all the sufferings that I had been through.” But for Tan Seka, the court did not go nearly far enough. “I don’t think only these two people could commit all these crimes. I pity this court for spending such a long time and a lot of money just for these two people.”

Indeed, the cost of the court has drawn widespread criticism inside and outside Cambodia. From 2005 to April 2017, total expenditures reached nearly $300 million, about 75 percent of which was covered by foreign donors. Although this figure remains far less than costs of other comparable war crimes tribunals, some Cambodians have questioned whether some of that money might have been better spent on development projects. In 2017, the Co-Investigating Judges threatened to halt the remaining cases under investigation due to insufficient funding. However, in August of that year, following submissions from the United Nations and donor countries, the co-Investigating Judges determined that the proceedings could continue following a noticeable improvement in the funding situation.

The court’s defenders acknowledge the frustrations of the slow pace but say there is little alternative. “Investigating and prosecuting atrocity crimes, which involve thousands, hundreds of thousands, or sometimes millions of victims and vast crime scenes and hundreds upon hundreds of witnesses are all complex challenges which require sufficient time and significant resources to master,” said David Scheffer, the UN secretary-general’s special expert on UN assistance to the Khmer Rouge trials, addressing an audience at the William & Mary Law School in February 2015.

In the meantime, public disputes between senior court officials, strikes by court employees claiming nonpayment of wages, and claims of corruption within the court have detracted from its image as a transparent, efficient dispenser of justice. Another major stumbling block to the Court’s effectiveness has been a fundamental disagreement about the scope of the Court’s jurisdiction.

Despite these criticisms and obstacles, the court has been widely viewed as a success. It has prosecuted senior Khmer Rouge figures. It has contributed to helping Cambodians recover from trauma by establishing the facts of the crimes committed against them, in accordance with internationally recognized legal standards. It has occurred inside Cambodia, so citizens can witness the justice process firsthand. And it has helped spread the message to the world that perpetrators of mass atrocities must be brought to account.

Justice beyond the Courts Previous