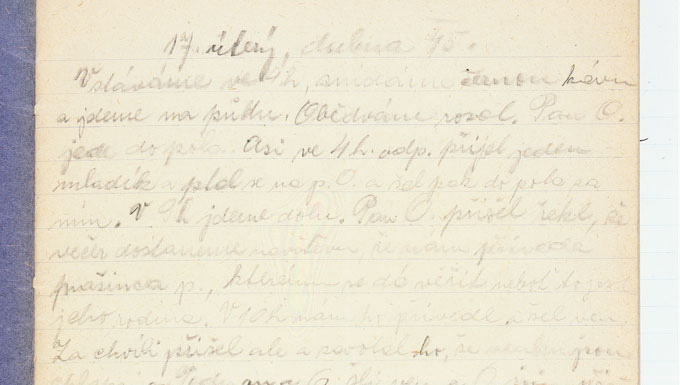 Otto Wolf (1927–1945), a Czech Jewish teenager, chronicled his family's experience living in hiding in rural Moravia during World War II. His journal began on June 22, 1942, the day he and his family escaped from an assembly center in Olomouc, Moravia, where they had been taken for deportation to Theresienstadt. Otto's last diary entry is dated April 13, 1945. On April 18, he was captured and arrested. He was shot two days later on April 20. His family did not know of his fate; his sister Felicitas began writing in his diary, keeping it up to date for his expected return. This image shows book 4 of Otto Wolf's diary. This is the first entry by Felicitas Garda (Otto Wolf's sister) dated April 17, 1945. Felicitas continued Otto's diary after his disappearance.

Previous: Liberation of Bergen-Belsen Next: Evacuation of Prisoners from Sachsenhausen