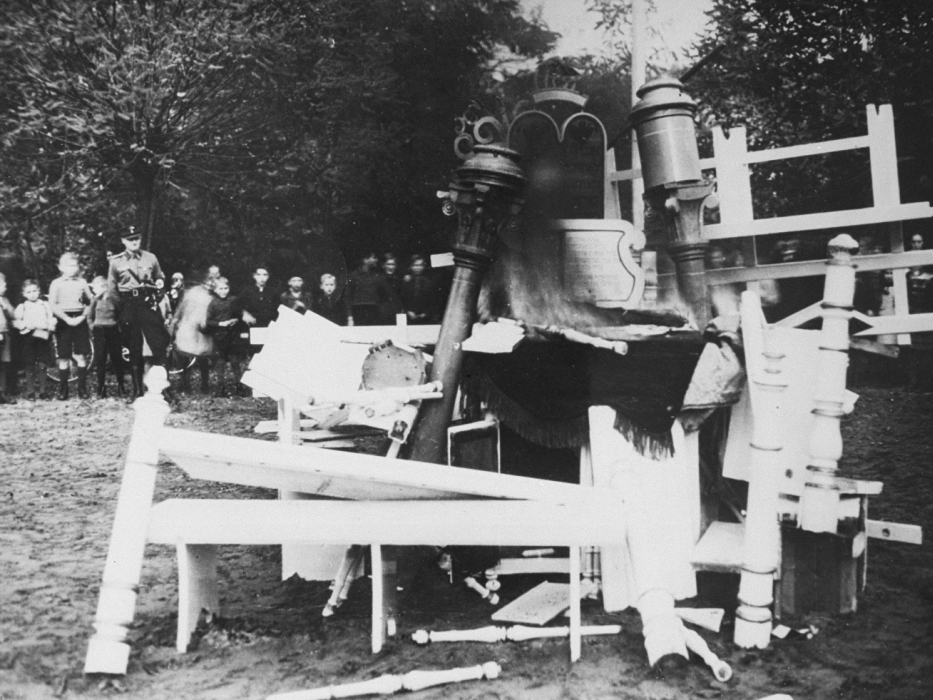 The school director was ordered to bring the students of Zeven to observe the bonfire, but was himself absent as were most of the adult inhabitants of Zeven. Adult male Jewish residents of Zeven were arrested and deported to the concentration camp at Sachsenhausen. –Leo Baeck Institute

What appears to be happening, and who are the people in the photograph?

A bonfire of the synagogue’s contents blazes before the assembled schoolchildren of Zeven. An SS man stands in front of them.

Why do you think the Nazis decided to burn synagogue furnishings in the town square instead of simply destroying them with the synagogue?

After piling the furnishings in the town square, the Nazis were able to gather the town's schoolchildren to witness the burning. Presumably, their intent was to set an example for the children about how to hate Jewish people.

What roles do teachers and parents traditionally fill for children? How was that role changed in Zeven during Kristallnacht? Who seems to be filling this role?

Teachers and parents normally act as role models and moral authorities in children's lives. During Kristallnacht the adults of Zeven appear to have given up this role to the Nazi party since no other adults are visible in this photograph. The implications are that the Nazi party was acting as authority and role model for the children of Zeven.