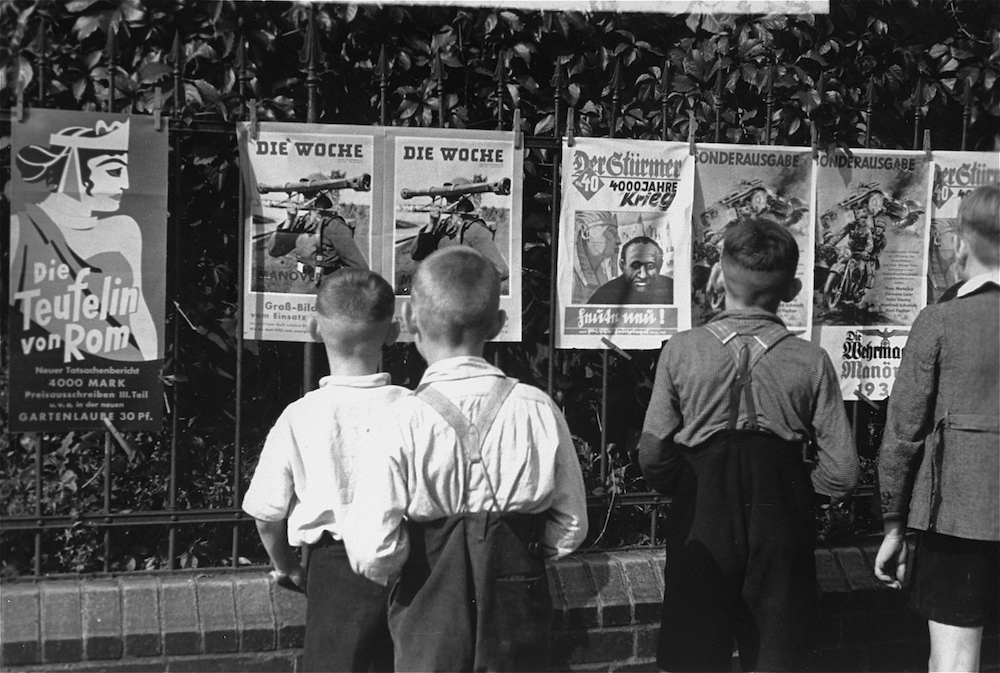 A group of young German boys view Der Stürmer, Die Woche, and other propaganda posters that are posted on a fence in Berlin. ——US Holocaust Memorial Museum, courtesy of Julien Bryan Archive

Propaganda is the dissemination of information to influence or control large groups of people. In totalitarian regimes like Nazi Germany, propaganda plays a significant role in consolidating power in the hands of the controlling party.

Shortly after rising to power in 1933, Adolf Hitler created the Reich Ministry of Public Enlightenment and Propaganda (RMVP), headed by Joseph Goebbels. Nearly all aspects of German culture were subject to the Propaganda Ministry's control, including films, theater, music, the press, and radio broadcasts. Given tremendous leeway by Hitler, and utilizing modern techniques and technologies, Goebbels quickly set out an ambitious agenda to indoctrinate the German people in Nazi ideology and to influence the behavior of the entire society. The principles of Nazism, including the antisemitism at the core of much of its dogma, were incorporated into nearly every newspaper, radio broadcast, and film produced in the Third Reich. These carefully-crafted messages were designed to mobilize the German population to support all Nazi military and social efforts, including the deportation of Jews and others to concentration camps.

The following bibliography was compiled to guide readers to selected materials on Nazi propaganda that are in the Library's collection. It is not meant to be exhaustive. Annotations are provided to help the user determine the item's focus, and call numbers for the Museum's Library are given in parentheses following each citation. Those unable to visit might be able to find these works in a nearby public library or acquire them through interlibrary loan. Follow the "Find in a library near you" link in each citation and enter your zip code at the Open WorldCat search screen. The results of that search indicate all libraries in your area that own that particular title. Talk to your local librarian for assistance. All items are in English unless otherwise indicated.

The Reich Ministry of Public Enlightenment and Propaganda

Propaganda in Film and the Arts

To search library catalogs or other electronic search tools for materials on Nazi propaganda, use the following Library of Congress subject headings to retrieve the most relevant citations: