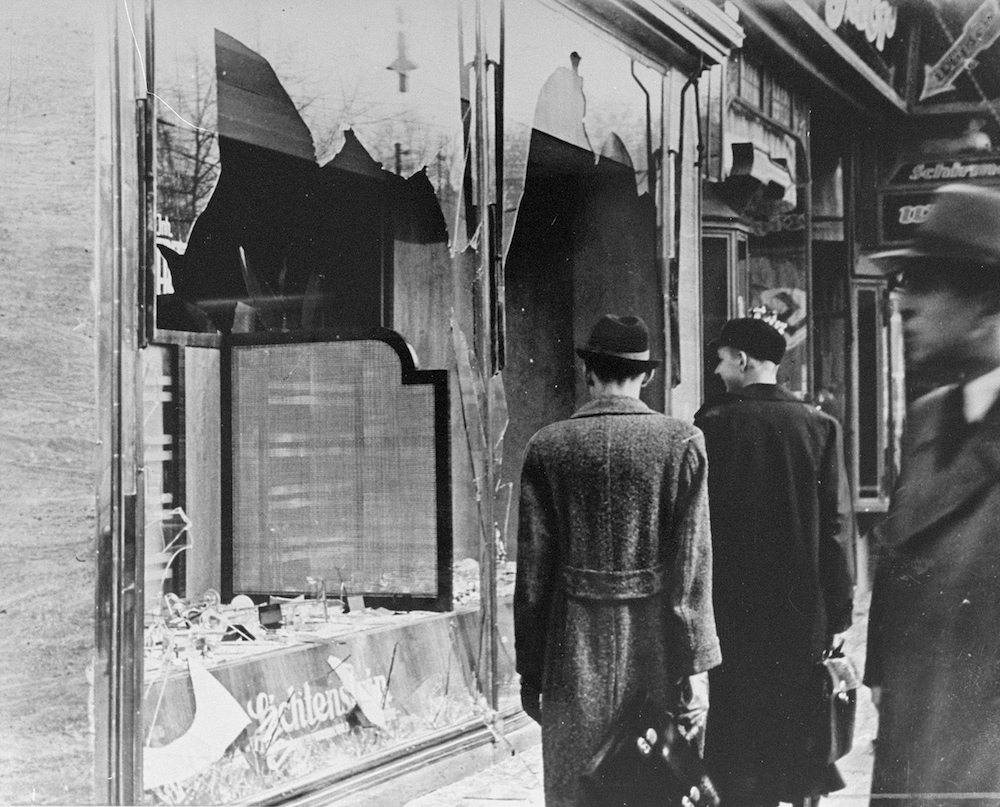 Germans pass by the broken shop window of a Jewish-owned business that was destroyed during Kristallnacht. ——US Holocaust Memorial Museum, courtesy of National Archives and Records Administration, College Park

On the night of November 9, 1938, violent anti-Jewish demonstrations broke out across Germany, Austria, and the Sudetenland region of Czechoslovakia. Nazi officials depicted the riots as justified reactions to the assassination of German foreign official Ernst vom Rath, who had been shot two days earlier by Herschel Grynszpan, a 17-year old Polish Jew distraught over the deportation of his family from Germany.

Over the next 48 hours, violent mobs, spurred by antisemitic exhortations from Nazi officials, destroyed hundreds of synagogues, burning or desecrating Jewish religious artifacts along the way. Acting on orders from Gestapo headquarters, police officers and firefighters did nothing to prevent the destruction. All told, approximately 7,500 Jewish-owned businesses, homes, and schools were plundered, and 91 Jews were murdered. An additional 30,000 Jewish men were arrested and sent to concentration camps. Nazi officials immediately claimed that the Jews themselves were to blame for the riots, and a fine of one billion reichsmarks (about $400 million at 1938 rates) was imposed on the German Jewish community.

The Nazis came to call the event Kristallnacht (“Crystal Night,” or, “The Night of Broken Glass”), referring to the thousands of shattered windows that littered the streets afterwards, but the euphemism does not convey the full brutality of the event. Kristallnacht was a turning point in the history of the Third Reich, marking the shift from antisemitic rhetoric and legislation to the violent, aggressive anti-Jewish measures that would culminate with the Holocaust.

The following bibliography was compiled to guide readers to materials about the Kristallnacht pogrom that are in the Library’s collection. It is not meant to be exhaustive. Annotations are provided to help the user determine the item’s focus, and call numbers for the Museum’s Library are given in parentheses following each citation. Those unable to visit might be able to find these works in a nearby public library or acquire them through interlibrary loan. Follow the “Find in a library near you” link in each citation and enter your zip code at the Open WorldCat search screen. The results of that search indicate all libraries in your area that own that particular title. Talk to your local librarian for assistance.

To search library catalogs or other electronic search tools for materials on the Kristallnacht pogrom, use the following Library of Congress subject headings to retrieve the most relevant citations: